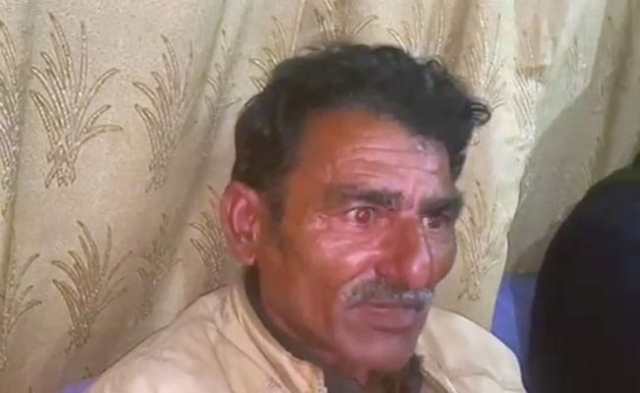 Ground Report | New Delhi: Abdul Latief Magray; The anti-militancy operation carried out by security forces and police at a commercial complex in Srinagar’s Hyderpora on Monday night has become controversial. Relatives of three of the four killed have denied police claims and questioned the encounter in which “innocent” people were killed.

He said that my son used to study in Deoband Darul Uloom. When Covid’s first lockdown took place, Aamir returned home. After that, he started working with Dr. Gul.

Abdul Latif Magray, who prominently shot a terrorist with a stone in the Ramban district in 2005, was given the Bravery Award for killing a terrorist by the state administration in 2012. On 15 January 2006, the then Northern Army Commander presented a Certificate of Commendation to Abdul for his work in counter-terrorism in the region during 2005–06. A police officer confirmed Latif’s contribution to counter-insurgency operations.

Families of two civilians killed in the encounter protested in Srinagar on Wednesday and demanded their bodies be handed over (after the encounter the four were buried by the police in Handwara, 70 km from Srinagar). Late in the night, the officials removed the family members from the sit-in site.

“I was given a letter of commendation by the army in 2005 for carrying out a terrorist attack on the Yamasadna,” Abdul said. I myself have been shot by terrorists. My cousin was killed in a terrorist attack. We had to move away from home for 11 years. Hiding the children in secret places and facing endless difficulties. An Indian man who killed a terrorist was rewarded for his sacrifice by stamping his son as a terrorist.

Magray said that the police have also refused to return his son’s body for the last rites. “The denial of my son’s body is a reward for the fight against terrorists. I am still under police guard at my house. Tomorrow the security guards can kill me and claim that I was a terrorist,” he said.

Tensions have risen in the Ramban district over the killing of Mohammad Amir, who was killed in the Hyderpora encounter. Therefore, in some villages, the police imposed restraining orders. Police in riot gear stormed a rally on Friday, removing hundreds of protesters by truck. Police claim that Aamir was killed along with his Pakistani accomplice Haider.

Late-night on Wednesday police cracked down on opposing relatives of two businessmen Mudasir Gul and Altaf Bhat, who was killed in a controversial encounter in Srinagar’s Hyderpora area on Monday. The families were forcibly removed from the protest site and taken in police vehicles. Facing the bitter cold, they protested and lit candles on Wednesday night to demand the return of the bodies of Mudasir Gul and Altaf Bhat, so that relatives could bury them properly.

Families sitting by candlelight as part of their demonstration in the city’s press enclave, demanding police to return the bodies of the deceased for their last rites, were allegedly forcibly removed from the protest site and were taken away in police vehicles. A scuffle broke out between the protesters and the police as well.

Former Member of Parliament and Communist Party of India (Marxist) leader Yousuf Tarigami has demanded a judicial inquiry into the Haiderpura case and said that the bodies of their loved ones should be returned to their families.

Former Chief Minister and National Conference leader Omar Abdullah said in a tweet that a transparent investigation was needed into the Haiderpura encounter. Many questions are being raised about this encounter and the people who died in it.

Mehbooba Mufti, leader of the People’s Democratic Party, said in a tweet that “using innocent civilians as human shields, killing them in crossfire and calling them OGWs (overground workers) is part of the Indian government’s rollbook.” Has become a part. A credible judicial inquiry is needed to bring the truth to light and end the tradition of impunity.