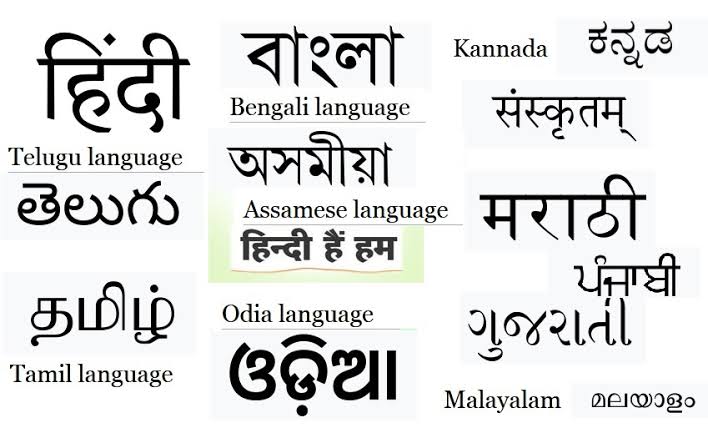 Language is a major feature of human existence because it helps humans to communicate with each other and develop relationships between them.

According to the census analysis, there are 121 languages ​​which are spoken by 10,000 or more people in India, whose population is 121 crores.

However, the population still faces challenges such as malnutrition, corruption, poverty, and inadequate health care. India is home to several major languages, the most notable of which are given below.

Hindi is the most spoken language in India. It is one of the official languages ​​of the country. According to the data of Indian languages ​​based on the 2011 census, the number of people speaking Hindi as mother tongue has increased in 2011 as compared to the 2001 census.

The second most spoken language in India is Bengali, which is spoken by 9.72 crore citizens i.e. 8.03 percent of the total population.

A total of 8.30 crore people speak Marathi in the country, which is 6.86 percent of the total population.

Telugu is a Dravidian language which is widely spoken in India in many states of the country. The language is also spoken in many countries including the United States, United Kingdom, New Zealand, Australia, United Arab Emirates and South Africa.

Gujarati is an Indo-Aryan language spoken by 5.54 crore people in India. It is the official language of Gujarat, a state located in north-western India. Let us tell you that Gujarati language has evolved from Sanskrit.

There are about 5.07 crore Urdu speakers in India. Urdu is also one of the official languages ​​of the country. Urdu is listed as an official language in the states of West Bengal, Bihar, Uttar Pradesh, Jammu and Kashmir, Telangana and Jharkhand.

Like Tamil, Kannada is also a Dravidian language. It is spoken by 4.37 crore people in India. Do you know that Kannada is one of the oldest living languages ​​in the world.

Odia is the official language of India and most of the speakers are centered in the state of Odisha. This language is spoken by 3.75 crore speakers across the country.

An estimated number of 3.48 crore speakers in India speak Malayalam, which is spoken in the states of Kerala, Puducherry and Lakshadweep. The roots of this language are also from the Dravidian languages.

Along with Hindi, the English language is one of the official languages ​​of the federal government of India. In some states of India like Nagaland and Arunachal Pradesh, English is an official language.

Due to the wide variety of languages ​​in India, communication between speakers is not hindered as most Indians are multi-lingual. Most Indians can speak English, Hindi and a mother tongue.

English is no longer considered a foreign language as it is popular as the most common mode of communication among people in the south and north of India.