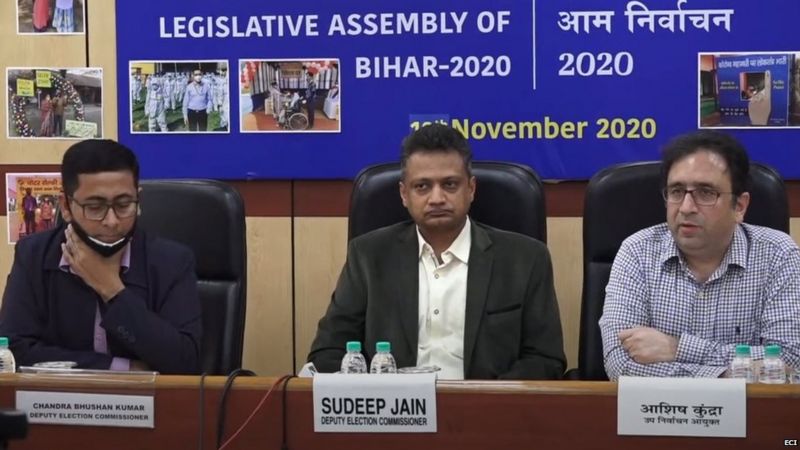 The result of Bihar election is in a very interesting phase. Which party or alliance is moving towards victory, it is a little difficult to say right now. There are about 40-50 seats where the difference between number one party and number two party is less than 1,000 votes.

The Election Commission had issued a separate guideline for whatever steps were to be taken for the rescue during the epidemic. Actually, he had to increase the number of polling booths in this first election during the Corona epidemic.

Earlier, at every polling booth, 1500 people were allowed to vote, which was reduced to 1000 people in this election.

On August 21, the Election Commission issued a separate guideline for the elections to be held in the era of Corona epidemic. According to the guideline, where there used to be 14 tables in the counting hall earlier, this time only 7 tables have been allowed there so that social distancing can be taken care of.

Election Commission has also increased the number of counting centers from 55 to 55 places, so that the election results do not have much impact.

In any assembly constituency, at least 19 rounds are to be counted and at least 51 rounds before the results are declared.

According to the Election Commission, if the average is calculated, the results of a constituency can be declared only after the calculation of about 35 rounds. Till 2015, there were about 26 rounds counted in each assembly constituency. It was increased every year due to increase in the population of voters in five years, but this time it is higher than the average of previous years.

This time the voting time was extended by one hour due to the epidemic. At the same time, polling in most polling stations, except in the most sensitive areas, could be done from 7 am to 6 pm.

The total number of voters in Bihar was 7.3 crore this time. In this assembly election, 57 percent votes have been cast this time. That is, approximately four and a quarter crore voters have exercised their voting rights.

If a total of 1 crore votes have been counted till 1 pm, then you can guess how much more time will be taken in counting 125 crore votes.

The next press conference of the Election Commission will be at 6 pm.