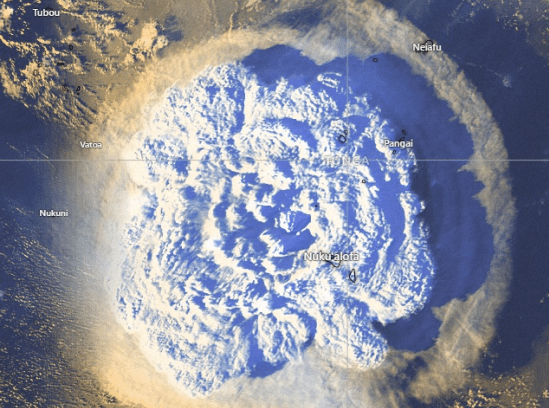 A tsunami warning has been issued in several countries, including Tonga and New Zealand, after an underwater volcano erupted. Tsunami Already hit Tonga, Earthquake also reported in many countries.

According to DW news A tsunami has flooded Tonga’s capital after a large volcanic eruption from an undersea volcano. Other Pacific islands have issued advisories and have cautioned residents to seek higher ground.

The Pacific island of Tonga experienced a large volcanic eruption Saturday followed by a tsunami that flooded parts of the capital, Nuku’alofa.

Social media footage from Tonga showed waves washing through a church and several homes. Ash is said to be falling over the capital, Nuku’alofa.

Residents of the Pacific island have been urged to move to higher ground.

It is the latest in a series of eruptions of the Hunga Tonga-Hunga Haʻapai volcano.

The US has also issued a tsunami advisory for American Samoa.

The Pacific Tsunami Warning Center said tsunami waves measuring 2 feet in height were observed by sea-level gauges in Pago Pago, the capital of the US territory of American Samoa, around 940 kilometers (580 miles) from Tonga.

A previous eruption on Friday sent plumes of ash and smoke into the air, with smoke clouds extending up to 20 kilometers (12 miles) into the atmosphere.

“A volcanic explosion just erupted and people have evacuated to higher ground now from possible tsunami waves also ash shards are falling and now the ash clouds are covering the island of Tongatapu.

“We live in Kolomotu’a near the ocean so we have left already and we are in our cars heading out but traffic on every road. Please pray for us as a family and safety.”