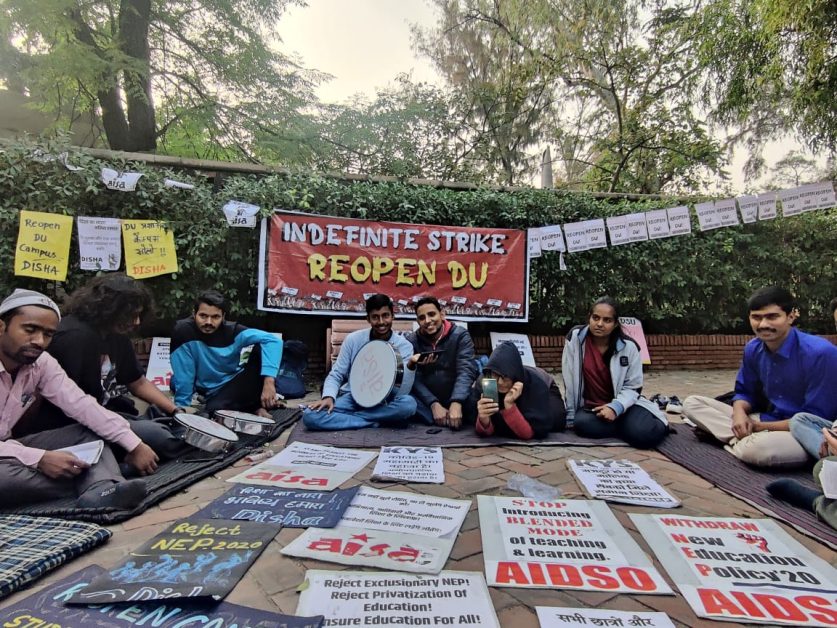 Ground Report | New Delhi: Protest to reopen Delhi University; It has been a month since the students started the protest to re-open the colleges of Delhi University and amongst all the protocols and guidelines there has been no notice or response regarding this from the administration. Various student unions like All India Students Association (AISA), SFI and other student unions are continuously organising protests outside the Arts Faculty of DU North Campus.

In a conversation with AISA Delhi President, Abhigyan, who has been hand in glove with this protest, said that the administration has been totally ignoring them but this indefinite protest is only going to become stronger. He said, “We went on a hunger strike for five days and were promised by the DU vice-proctors about the release of notice for re-opening of colleges post Diwali. This never happened and we again started our indefinite strike.” (Protest to reopen Delhi University)

Every day, more than fifty students from various part of Delhi-NCR come to join the protest on a daily basis. Abhigyan told that the Maurice Nagar Police station, which is nearby to DU North Campus has made a trend to file FIRs on the protestors, even if they are peaceful.

On asking about the motives and the driving forces of the protest, he talked deeply about many socio-economic problems. “We now call it the ‘digital divide’, with everything being online but the divide has been there from ages in this central university where students from all over the India, every class and caste come to study. The dropout rates have increased and the socially and economically deprived students are suffering.” He also criticized the the New Education Policy 2020 and questioned the viability of FYUP by saying it has no place for economically poor and marginalised community students.

“Nobody has come to talk to us from the DU admin but as it is told in media that the university is waiting for a nod from DDMA, that is just a cover-up. We are not demanding hundred percent reopening of colleges,” Abhigyan stated. He is positive that more and more students are joining and that they will not end their strike until a notice is released by Delhi University.