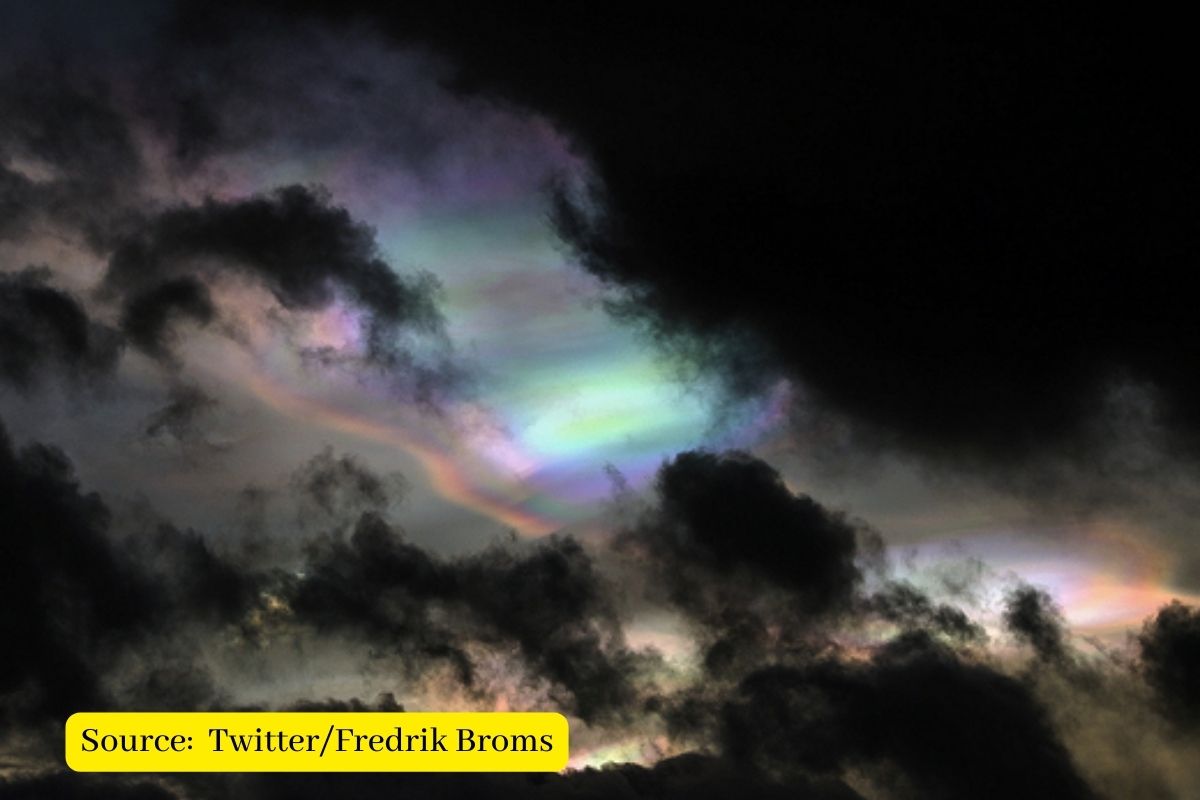 Strange and colourful clouds, known as mother-of-pearl clouds have been caught on camera high in the Norwegian sky. Photographer Fredrik Broms shared an image of a very rare cloud formation known as “nacre” that was seen in Norway

The coloured cloud derives its name from the interior of a pearl oyster shell and is caused by ice crystals in the stratosphere. They form at extremely cold temperatures, below -77°C, and can damage Earth’s ozone layer.

The Twitter user wrote “The most beautiful clouds on Earth just made an appearance over Norway. Polar stratospheric clouds are very rare. Normally the stratosphere has no clouds at all. PSCs form when the temperature in the Arctic stratosphere drops to a staggeringly low -85 C.”

“I’ve been keeping an eye out for Polar Stratospheric Clouds (PSCs) all winter,” Broms told spaceweather.com. “This morning, I caught a split-second glimpse of some really colorful PSCs, and within an hour another gap in the storm clouds revealed a bigger display.”

Polar stratospheric clouds are rare. Earth’s stratosphere is very dry and normally cloudless. PSCs form when the temperature in the Arctic stratosphere drops to a staggeringly low -85 C. Then, and only then, widely spaced water molecules can begin to coalesce into tiny ice crystals. High-altitude sunlight shining through the crystals creates intense iridescent colours that often resemble auroras.

These clouds occur between 49,000 and 82,000 feet in elevation, in the stratosphere layer of the atmosphere above the Earth’s poles, where very few clouds usually form due to a lack of moisture.

What is mother-of-pearl clouds?

Nacreous clouds (also known as mother-of-pearl) are polar stratospheric clouds found high in the stratosphere moments after sunset in regions near or on the Arctic Circle. This rare weather phenomenon, mostly confined to the polar regions, is identified by its unique display of iridescent colours and patterns.

Why are they called mother-of-pearl clouds?

The word “nacar” in nacreous clouds is derived from the word “nacar”. Mother-of-pearl is the substance responsible for the iridescent rainbow and pastel colors are known as “nacre” found in certain mollusk shells.

The unique iridescent colours of the undercoat covered with this substance closely resemble pearlescent clouds. Hence the later denomination of the meteorological phenomenon is “clouds of mother-of-pearl”.