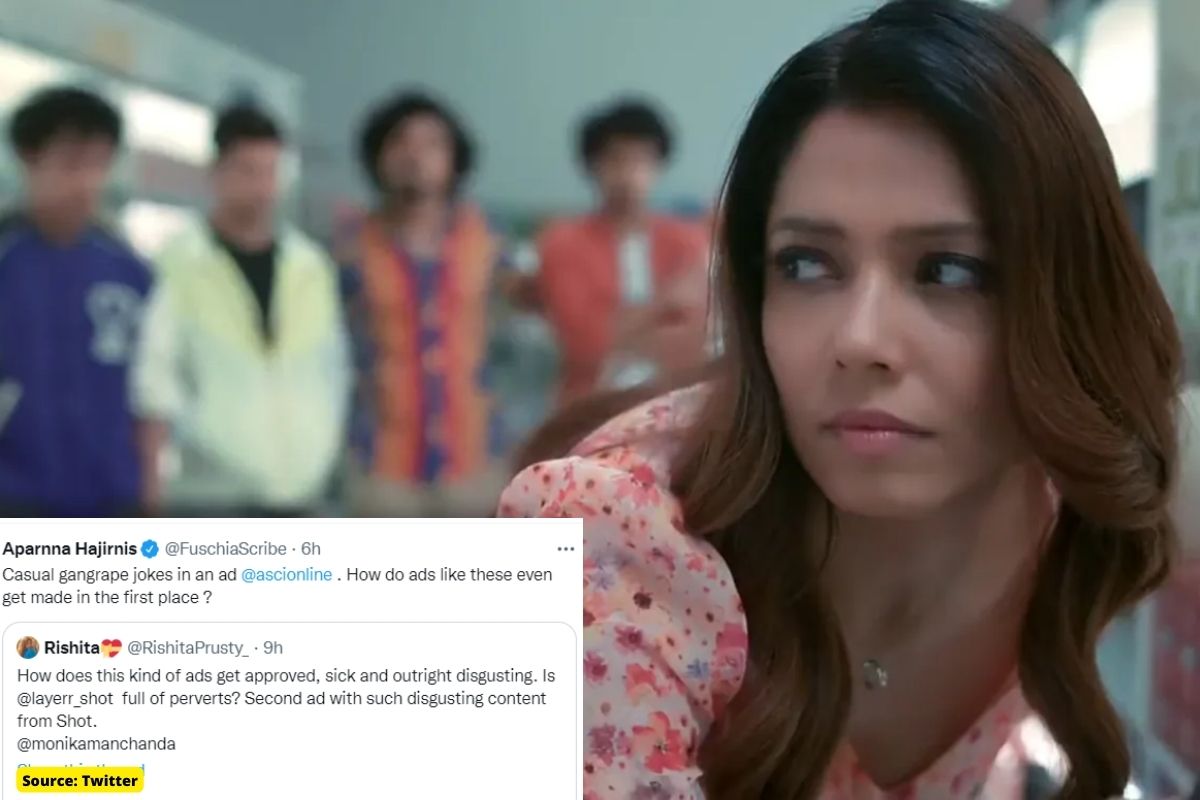 Layer’r Shot, Adjavis Venture Limited’s deodorant brand, the ads have been criticized by social media users who say it “promotes gangrape”. A new ad from Layerr Shot has crossed the threshold of being funny or entertaining with their sexist and downright disgusting new ad.

The ad depicts four boys and one girl, and one of the boys continues, “hum chaar woh ek, shot kaun lagayega?” Then the guy takes a bottle of perfume and puts it on. Not just one, the company has released a similar ad with the slogan “Shot kaun lagayega”.

“There have to be some regulations for ads man. That Shot deo ad is nothing short of disgusting actually. Even though I knew it was an ad and it wouldn’t happen. The fear for a second I felt was real. Imagine making an ad on the fears of millions of women! WTF!,” the user wrote.

“Ladies and gentlemen, the same brand that produced the above ad. Should tell us how all these days are worth shit, The user further wrote.

“Can’t find the ad online but here it is, apparently being played during the match. I didn’t see it till @hitchwriter showed it to me Who are the people making these ads really?,” the user added.

The second ad begins with a couple in a bedroom. Four of the boy’s friends enter the room and ask the girl a rude question. The ad then reveals that the friends were just asking if they could use the perfume that was kept in the room.

Delhi Commission For Women Chairperson Swati Maliwal, Tweeted “What a pathetic advertisement! What are these guys trying to promote, gang-rape? I am issuing notice to Delhi Police to register an FIR against the company. Also writing a letter to Min I&B @ianuragthakur ji to immediately stop this advertisement from playing on mass media.”

@layerr_shot what kind of advertisement you are running on TV. The use of word “Shot” along with the expressions on women/girl face and the setting, all smack of a most putrid corrosive masculinity. Not only the advertisement but your product also needs to be banned for ever.

Another twitter user wrote “Unbelievable! Sent a chill down my spine just watching this. What is the agency smoking and @layerr_shot and founder Devendra Patel , did you not even think ? Ads need to be brought down right away!

Another user wrote, “There have to be some regulations for ads man. That Shot deo ad is nothing short of disgusting actually. Even though I knew it was an ad and it wouldn’t happen. The fear for a second I felt was real. Imagine making an ad on the fears of millions of women,”

“Found it horribly wrong and uneasy to watch. It’s sickening, actually. There are more in the series. @ascionline please intervene,” tweeted another user.

“Shocking.. Why do they have to reduce the status of Woman to this level? Rapes, Eve teasing, oppression on woman is at its Highest… What do we want to teach our kids?”

“@layerr_shot Have you lost it? In what mind frame did you even think of going ahead with such a horrendous ad? It’s in bad taste and offensive. It cheap and absolutely disgusting. #LayerrShotCheapShot” another user tweeted.

Another user tweeted, “Absolutely disgusting and highly irresponsible advertisement by @layerr_shot perfume guys running on @SonyTenSports #ENGvsNZ . Please remove it as it is sending vulgar and inappropriate messages to the youth.”

“Back in the early 2000s, TVCs were blatantly contributing to r@pe culture. I would often chance upon them while browsing through old ones on youtube and just sit in utter disbelief. It’s 2022, & a brand like Layerr Shot has come up with two of them referring to gangr@pe” tweeted another user.

User tweeted, Someone wrote this. Somone made this. Someone approved this. Some acted in this. The words “rape culture” must have crossed their mind at some point during this process, and they all felt it’s okay.

The user further tweeted “It’s beyond me that someone from a reputed ad agency ideated this, wrote the dialogues and got paid for it and then a TV Channel broadcasted it.”

The advertising regulator quickly took to Twitter to respond to the request, stating: “Thank you for tagging us. The ad seriously violates the ASCI Code and is against the public interest. We took immediate action and notified the advertiser to suspend the ad.” announcement, pending investigation”.