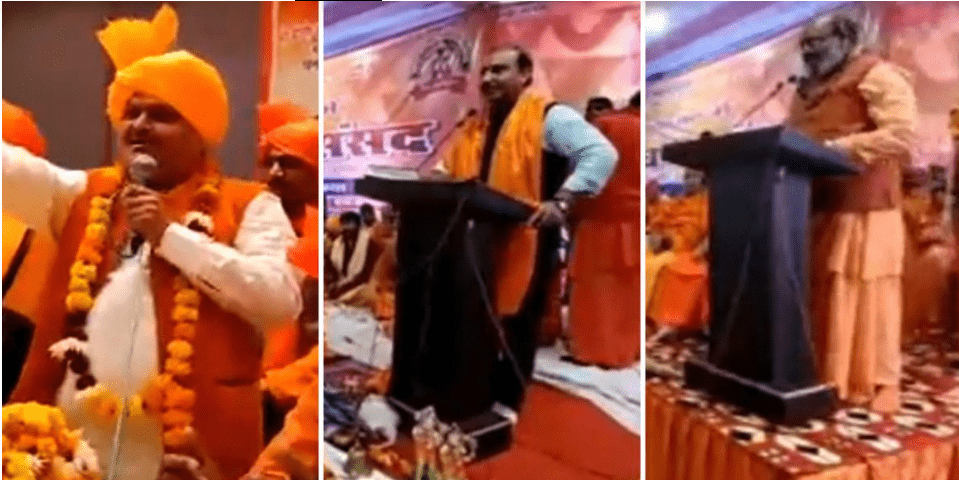 The police have already registered a case against Wasim Rizvi alias Jitendra Narayan Tyagi, former chairman of Shia Waqf Board of Uttar Pradesh in this case. Both the accused are saints of Haridwar.

Such a reaction is coming for India from abroad on the Haridwar incident.
‘Dharma Sansad’ was organized from 17 to 19 December at Ved Niketan in Kharkhari, North Haridwar. Many saints including Mahamandaleshwar Yeti Narasimhanand, Jitendra Narayan Tyagi alias Wasim Rizvi, Swami Prabodhanand Giri, Dharmadas, former UP Shia Waqf Board chairperson Sadhvi Annapurna attended the Dharma Sansad.

Videos of provocative speeches given in the Parliament of Religions regarding a particular community had gone viral, about which TMC spokesperson Saket Gokhale had also raised questions by tweeting. After this, many big leaders from across the country and senior officers associated with the army also criticized it.

Here’s what other speakers said:

Annapurna Maa, Mahamandleshwar of Niranjini Akhada, and General Secretary of Hindu Mahasabha said: “If you want to eliminate them, kill them… we need 100 soldiers who can kill 20 million to win this”.

Dharamdas Maharaj from Bihar said: “Had I been present in Parliament when PM Manmohan Singh said minorities have the first right over national resources, I would have followed Nathuram Godse, I would have shot him six times in the chest with a revolver.”

Anand Swaroop Maharaj said: “If the governments do not listen to our demand (He means establishment of a Hindu Rashtra through violence against minorities), we will wage a war far scarier than the 1857 revolt.” No sedition?

Sagar Sindhuraj Maharaj said: “I keep repeating again and again that keep 5000 rupee mobile but buy a 1 lakh rupee weapon. You should at least have sticks and swords.”