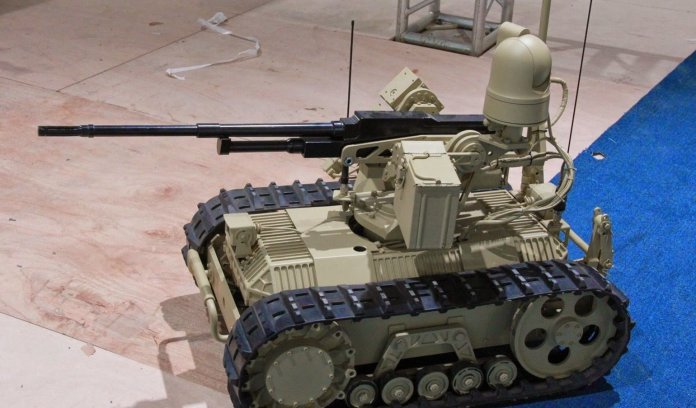 Ground Report | New Delhi: China replaces soldiers with Robots; China is deploying machine gun-carrying robots in its western desert regions amid a clash with India because troops are struggling with the high-altitude conditions, it has been claimed.

Dozens of unmanned vehicles capable of transporting both weapons and supplies are being shipped to Tibet, Indian media report, and most are deployed in border regions where Chinese troops are locked in a clash with Indian soldiers.

Vehicles include the Sharp Claw, which is mounted with a light machine gun and can be operated wirelessly, and the Mule-200, which is designed as an unmanned supply vehicle but can also be equipped with weapons.

Beijing has sent 88 Sharp Claws to Tibet, which borders India high in the Himalayas, of which 38 are deployed in the border region, according to Times News Now.

Some 120 Mule-200s have also been sent to Tibet, News Now reports, and most of them have been deployed to the border area. In addition to unmanned vehicles, China has also beefed up its forces with 70 VP-22 armored personnel carriers, 47 of which are located in border areas.

Another 150 Lynx ATVs were also dispatched to the border. The Lynx is enormously versatile and can be used to carry small numbers of troops or be mounted with various weapons systems, including howitzers, heavy machine guns, mortars, or missile launchers.

Beijing deployed the vehicles after state media previously reported that the soldiers had been fitted with exoskeleton suits to help them cope with transporting supplies at extreme altitudes.Soldiers were given carbon fiber exoskeletons to relieve pressure on their legs and ankles while carrying heavy equipment and supplies 16,000 feet above sea level. (China replaces soldiers with Robots)

The troops had been fighting because the lack of oxygen at that altitude makes the loads feel heavier, while the soldiers also tire more easily. “This type of suit is particularly useful at high altitudes,” a military expert told the Global Times in December last year.

China and India have fought intermittent conflict in their border region for decades along what is known as the “line of control.” The border region is very dry, remote, largely inhospitable and of little practical value, but its control is a highly symbolic issue for both parties.

The region, which is extremely dry, remote, and largely inhospitable, has little practical value beyond a few trade routes that cut through its deserts, but has symbolic significance for both sides wanting to show dominance. Tensions rose in 2020 when hand-to-hand fighting broke out between Chinese and Indian troops, with dozens killed in skirmishes fought with melee weapons, including nail clubs.

China accused India of provoking its troops, while India accused Beijing of trying to redraw the border and invade its territory. Satellite images appeared to back up India’s claims, showing new Chinese construction in disputed areas. The clashes sparked a diplomatic exchange between Beijing and Delhi, with India severing some commercial ties and banning Chinese phone apps.

In June last year, China began dismantling some structures in disputed areas, easing tensions, although the region remains on high alert for further fighting. It comes in the context of broader military readiness on the part of China, which has seen it adopt an increasingly belligerent stance with its neighbors, especially with Taiwan.