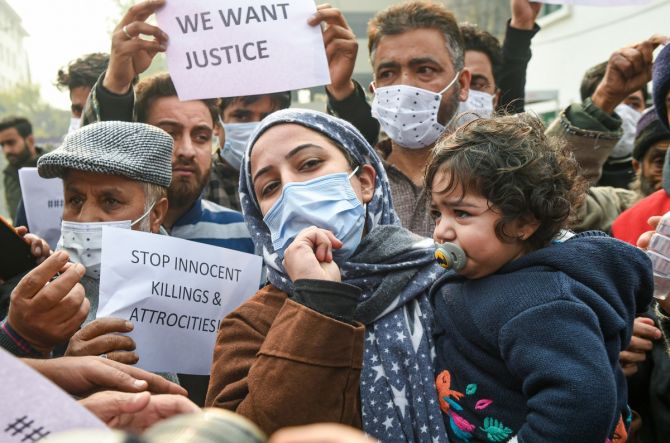 Ground Report | New Delhi: Hyderpora encounter SIT report; As political parties have called the Hyderpora investigation report an “ornamental investigation” to “protect the killers,” the Special Investigation Team (SIT), set up to investigate the highly-publicized encounter, made clear Wednesday that the investigation is still ongoing.

The SIT, however, has warned political leaders that action will be taken against him for making speculative statements to provoke people.

“Today 12.29.2021 the Special Investigation Team found several posts in the media by some political leaders and family members in which they have cast doubts on the evidence obtained by the SIT so far,” reads a statement issued by the SIT, which adds: These people have tried to call it “Made up cover story”, “Ornamental probe”, “Clean sheet to murderers”, “Police fairy tale”, and so on.

“A judicial investigation was initiated and, consequently, the investigating officer issued a general notice through electronic and printed means and invited the general public to register their statement if any of those persons have any knowledge, knowledge or evidence about the incident.

“All those people who make statements should have approached the investigating officer with genuine evidence that they have, to corroborate or contradict the facts that emerged in the case,” SIT said.

“All such individuals are advised once again to provide any kind of evidence if they have done so regarding the incident so that all aspects of the investigation are covered and concluded on the merits,” the SIT said.

“Such speculative statements by political leaders have a tendency to create a provocation, rumors, fear and alarm among the masses in general or a particular sector of society,” he said, adding: “This kind of approach goes against the rule of law. and it can attract suitable penal dispositions as foreseen in the law “.

Relatives of the murdered building owner Altaf Ahmed Bhat and Dr. Mudasir Gul on Wednesday rejected the police SIT investigation saying it “looks like a fairy tale” and added that Altaf was tortured and killed while Dr. Gul urged the police to show them CCTV footage of the murdered doctor transporting a foreign militant.

“The SIT probe is totally fake. I reject it. My brother had severe torture marks on his body. How is it that he became a human shield as claimed by the police when 2000 members of the security forces were present at the scene? “Abdul Majeed Bhat said while reacting to the SIT investigation, to the Kashmir News Observer (KNO) news agency. He said they don’t buy the police version because it looks like a “well-written story.”

ALSO READ: How deadly is the Omicron variant, 781 Omicron infections in India

Similarly, Humaira Gul, the wife of Dr. Mudasir Gul, also rejected police claims that she claimed that those who were killed or those who killed them were known to the truth. “What I mean is that my husband was a doctor by profession and why was he going to risk his family, his little daughter, his parents for nothing. His character is an open book and his friends and I, as his wife, know what kind of person my husband was, ”she told KNO, adding that the police must show them the CCTV images where Dr. Gul allegedly transported the militant foreigner Bilal Bhat.

The People’s Alliance for the Gupkar Declaration (PAGD) on Tuesday called the latest police statement on the Hyderpora incident a fabricated cover story, saying nothing less than a credible judicial investigation will clear up any doubts.

In a statement issued, PAGD spokesperson MY Tarigami said that today’s J&K police press conference on last month’s tragic Hyderpora incident is just a replay. from an old story. “It doesn’t even give an objective picture of this shocking incident,” he said.

Speaking to the media, Bukhari said that they do not accept the investigation carried out by the police, saying that the killers should be brought to the account. Who are the police to deliver good news in the Hyderpora incident? A judicial investigation must be carried out in this regard and the murderers will be identified, ”he said.