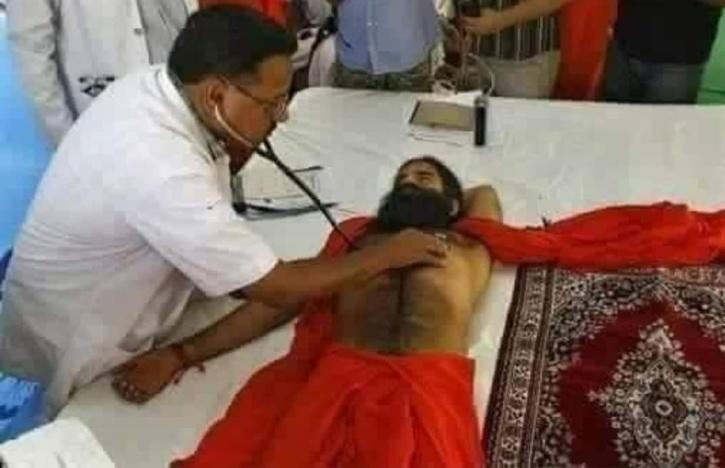 Ground Report | New Delhi: Indian Medical Association celebrated Black Day in protest against Ramdev’s controversial statement on allopathy. In this regard, an old picture of Baba Ramdev is becoming very viral on social media. In today’s time, whatever the opposition may be, the intervention of social media users has become imperative. On this issue too, is being opposed a lot through social media.

In this viral picture, Baba Ramdev is lying on a stage and the doctor is checking his heartbeat with a stethoscope. After the photo went viral, Ramdev has once again come under the target of social media users.

Although information has  not yet been revealed that when and where this picture was taken, but despite this, people are giving tremendous reaction to this old picture. Taking fun on this viral picture, people wrote that ‘Swami is treating the doctor’s ears with his beats.’

IMA also served a defamation notice to the Yoga Guru, demanding a written apology within 15 days. If he fails to provide the public apology and a video countering earlier claims, they will sue for Rs. 1000 crores as compensation from him. This intensifying row with allopathic practitioners has also taken social media by storm. However, Swami Ramdev has remained defiant despite the backlash.

The row started early last week, when a video of Ramdev calling allopathy “a stupid and bankrupt science” went viral. In the video, he also claimed that lakhs of people had died due to allopathic medicines prescribed for Covid-19. The remarks received severe backlash, with FORDA alleging that this would add on to “vaccine hesitancy” in the country. Medical professionals are also irked by the comments disregarding their work and sentiments.

Recently, in response to hashtags such as #ArrestRamdev, #ArrestQuackRamdev, he said “not even their father can arrest Swami Ramdev”. IMA-Uttarakhand officials said that the remark was “arrogant”. FORDA has already demanded the yoga guru face action under the Epidemic Diseases Act, 1897. There is a push for charging the Baba with sedition as well.