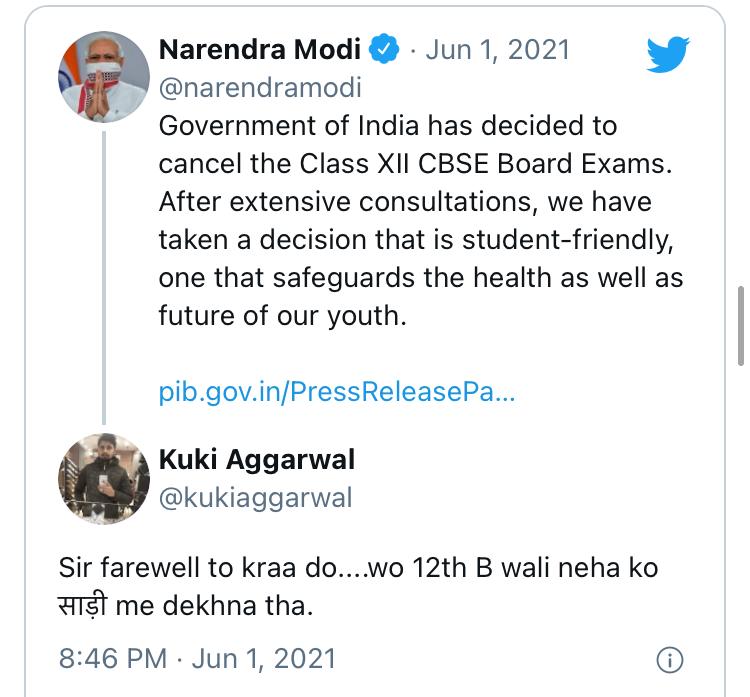 While there were some tweets make much of Prime Minister Narendra Modi for his decision to cancel the Class 12 board exams, there was one particular reaction that went viral on social media.

Ground Report | New Delhi: The Central Board Of Secondary Education (CBSE) cancelled board examination for Class 12 on Tuesday (June 1). The decision was taken in meeting manage by Prime Minister Narendra Modi. The country has been hit hard by the second wave of COVID-19 and the decision to not conduct the board exams was taken keeping in mind the variability caused by pandemic. Students upraised a sigh of relief and praise the Prime Minister’s decision.

However, a boy’s reaction to PM Modi’s tweet has gone crazy viral on social media. After it was decided in the meeting to cancel board examination for Class 12 CBSE students, the news.

PM Narendra Modi tweet that Government of India has decide to cancel the Class XII-CBSE Board Exams. After extensive consultations, we have taken a decision that is student-friendly, one that safeguards the health as well as future of our youth.

After that several tweets lauding PM Modi for his decision, there was one particular reaction that went viral. A student tweeted a farewell-day request to the Prime Minister.  “Sir Farewell… (Sir, please allow the farewell…I want to see Class 12 B’s Neha in saree)” The comments reads. The Twitter user’s reaction to PM Modi’s tweet has gone viral in no time. It has plot over 338 retweets and 1,400 likes. Cyber citizens responded with jokes and memes.

Also Read:  What is the confusion about real age of Heeraben Modi?

In the meantime, a screenshot of what appears to be a WhatsApp conversation between Neha and the twitter user surfaced on social media. As per the conversation, Neha said, “If you wanted to see me in saree you could tell me. Now everyone messaging me,” to which’ he replied, saying.” How would I know that it would be go viral.”

The decision to cancel the class 12 board exams comes after a long delay. In the meeting, Prime Minister Narendra Modi said “The Health and Safety of our students is of most important and there would be no compromise on this side.