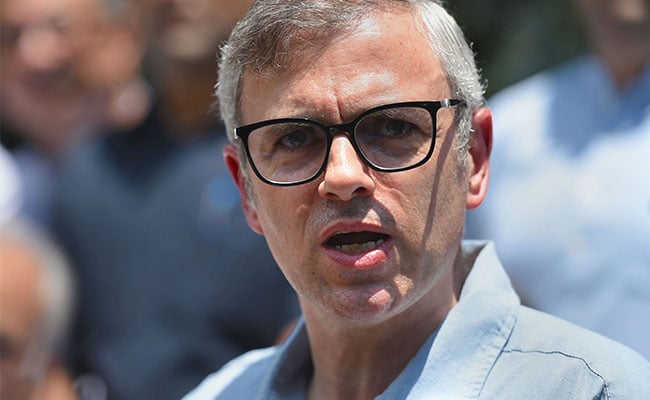 A Group of political parties of Jammu and Kashmir ‘Gupkar Alliance’ was going to protest against the central government on Saturday, but before the start of this demonstration, the houses of the leaders were locked and vehicles of security forces were deployed in front of the residence.

Omar Abdullah tweeted pictures of the police car at the gate and wrote, “Good morning & welcome to 2022. A new year with the same J&K police illegally locking people in their homes & an administration so terrified of normal democratic activity. Trucks parked outside our gates to scuttle the peaceful @JKPAGD sit-in protest. Some things never change..”

After this he made another tweet, “Talk about a lawless police state, the police have even locked the internal gate connecting my father’s home to my sister’s. Yet our leaders have the cheek to tell the world that India is the largest democracy, hah.”

Mehbooba Mufti, a PDP leader and chief minister in the BJP-led coalition, tweeted, “GOI trumpets scrapping Article 370 & dismembering J&K throughout the country but is deeply paranoid & intolerant when people of J&K want to protest against its disempowerment. For the umpteenth time, we’ve been placed under house arrest for trying to organise a peaceful protest.”

NC workers, including party spokesperson Imran Nabi Dar and youth wing president Salman Sagar, took out a protest march from the NC headquarters Nawa-e-Subah here. The party workers tried to proceed towards Gupkar Road, but were stopped by the police outside the party office.

“We wanted to take out a peaceful protest march against the draft resolutions of the Delimitation Commission, but were stopped by the police. They did not even allow us to stage a dharna,” Dar said. The NC spokesperson alleged that the police “dragged” the party workers back to Nawa-e-Suba.

PDP workers also took out a protest march demanding the restoration of Articles 370 and 35-A, which were revoked by the Center on August 5, 2019. The PDP workers were stopped by the police near the GPO and later peacefully dispersed.

Meanwhile, NC Vice President Omar Abdullah and PDP President Mehbooba Mufti praised their party colleagues for the protest. “Great for my @JKNC_ and @YNCJK colleagues to come out and register their protest against whatever is being done to power down people,” Omar wrote on Twitter.

In a tweet, Mehbooba said, “Despite the autocratic administration’s efforts to thwart our protest, PDP and NC workers today took to the streets in Srinagar to raise their voice against the illegal abrogation of Article 370. I salute their courage and resolve. I salute you.”