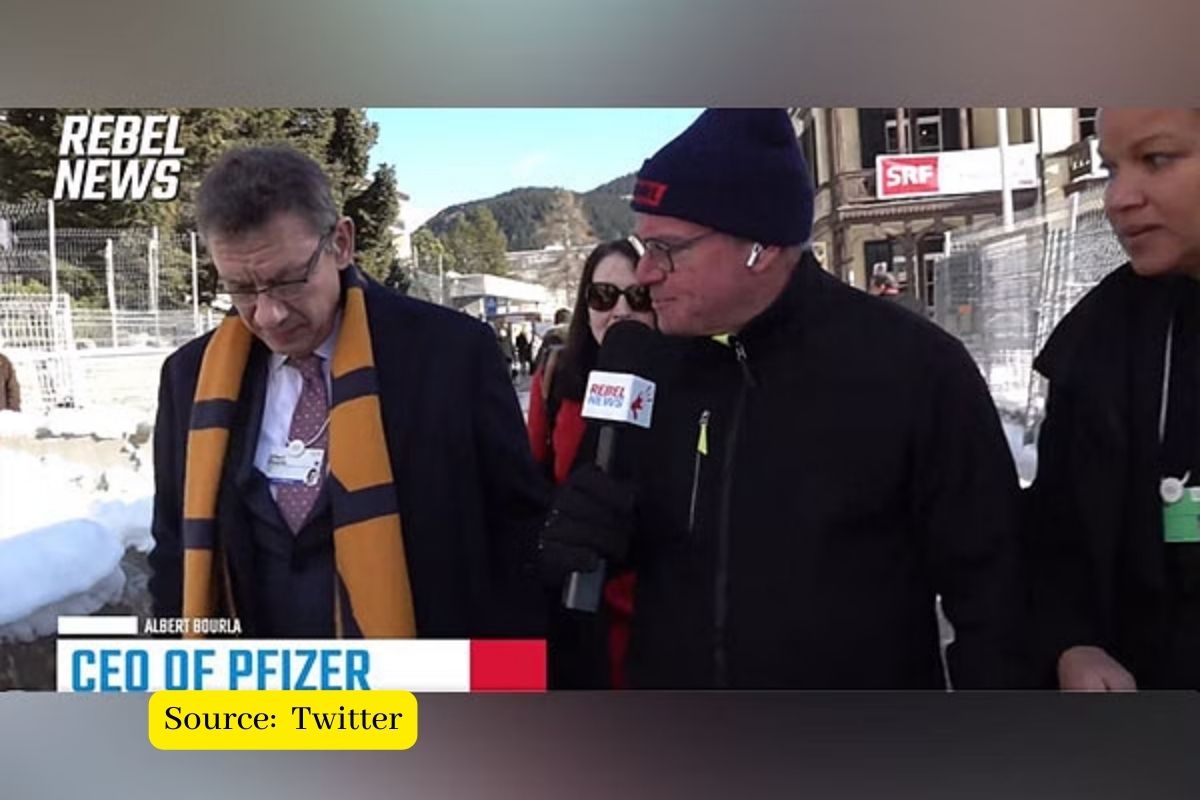 Albert Bourla, CEO chief executive of US pharmaceutical giant Pfizer, was faced with a series of tough questions about the efficacy of his Covid vaccine on the sidelines of the ongoing World Economic Forum meeting.

Albert Bourla did not want to answer any of the up to 29 questions he received in a matter of minutes from two journalists during a walk-through of Davos.

Pfizer has been at the center of the controversy over the coronavirus vaccine for months. Thus, the presence of its CEO, Albert Bourla, in Davos on the occasion of the popular Forum of the Swiss city did not go unnoticed. Even more so given the number of shady issues surrounding the pharmaceutical company due to covid-19. No one dared ask Bourla about them until two Rebel News reporters appeared on the scene.

These took advantage of a walk by the CEO of Pfizer through Davos to harass him, although without success, with uncomfortable questions. “We now know that the vaccine does not stop transmission, but why did you keep it a secret? He said it was 100% effective, then 90%, then 80%, then 70%, but now we know that vaccines don’t stop transmission. Why did you keep it a secret? Bourla was asked. “Have a nice day,” he replied: they would be the only words he would utter in the entire confrontation with the reporters.

I’m not going to have a good day until I know the answer. Why did you keep it a secret that his vaccine did not stop transmission? He continued to be questioned. Isn’t it time to ask the world for forgiveness, sir? Of reimbursing countries that poured all their money into their vaccine that doesn’t work? His ineffective vaccine? Aren’t you ashamed of what you’ve been doing these past two years? Do you have any apologies to the public, sir? Are you proud of it?, the journalists continued, before the silence and some face of circumstances of Bourla.

“He has made millions at the expense of people’s livelihood. How does it feel to walk the streets of millionaires at the expense of ordinary people in Australia, England and Canada? What do you think of this from your yacht, sir? What do you think of this from your private jet? Are you concerned about the legal liability of your product? Are you worried about myocarditis? And for sudden deaths? What do you have to say about the young men who are knocked down every day from heart attacks? “, the journalists insisted, with the occasional push from the people who accompanied the CEO of Pfizer.

Also Read:  What is known about new Covid variant XBB.1.5?

But, despite not getting a single answer, they did not give up: “Why don’t you answer these basic questions? No apologies, sir?” The barrage of questions continued for a bit longer, bringing the unresolved issue count to 29. An excerpt from the original Rebel News video has not taken long to go viral on social media.

Minister of State for Information and Technology tweeted video

India’s Minister of State for Information and Technology Rajeev Chandrasekhar, attaching the video of the Pfizer CEO’s awkward meeting with the reporter in Davos, tweeted: “Just to remind all Indians that Pfizer tried to intimidate the Indian government India to accept the terms of compensation”.

“People are shocked that only three vaccines are available in India: Covishield, Covaxin and Sputnik. Of the three, you can rule out Sputnik because only a small amount was imported in the early days,” Congress veteran Chidambaram tweeted on Dec. 27. , 2021.

“We have left with 2 vaccines thanks to the PROTECTIONIST policy of the Modi Government Pfizer, Moderna and other WHO-approved vaccines are kept out of India under one pretext or another That is why we do not have enough vaccines to give 2 doses to the adult population of 94 million rupees”.