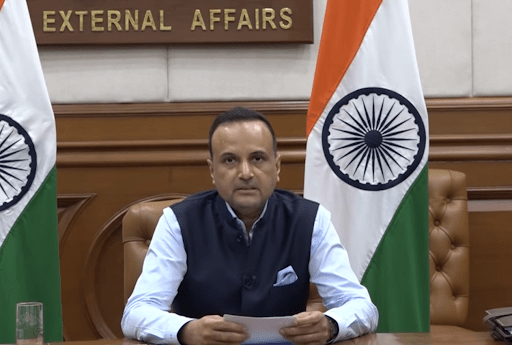 Ministry of External Affairs (MEA) spokesman Anurag Srivastava said that government had not sent a message to Pakistan to start talks. Srivastava made the remarks in response to a question about a statement by Pakistan’s National Security Adviser Moeed Yousaf in which he said that India had expressed a desire for dialogue with Pakistan.

“I want to make it clear that no such message has been sent by us,” Srivastava said.It may be recalled that a few days ago, Pakistan’s National Security Adviser Moeed Yousuf had revealed in an interview to leading journalist Karan Thapar that he had received a message from India to start talks on the Kashmir issue.

Moeed Yousuf said in an interview that Pakistan had made it a condition of the talks that India first “stop terrorist activities in Pakistani territory, and secondly that Kashmiri leaders be included in the talks on Kashmir.

Ministry spokesman said that he had read the news of an interview of a senior Pakistani official with an Indian media group in which, as usual, he commented on India’s internal affairs’.

“By raising India’s name, it is an attempt by Pakistan to divert attention from the failures of the present government on the domestic front and to mislead its people,” he said.

He added that he would advise the Pakistani official to “limit his advice to his government and refrain from commenting on India’s internal affairs”.

The spokesperson alleged that “Pakistan has continued to support and support cross-border terrorists against India and the Pakistani leadership has been making inappropriate, hateful and provocative statements against India.”

“Pakistan is violating the ceasefire without provocation to infiltrate terrorists across the border,” he said. “Supporting terrorism and using derogatory and vulgar language does not help to improve relations.”

Relationships have been frozen for years

Relations between India and Pakistan have been frozen for many years. Relations between the two countries have deteriorated further since the dramatic change in the constitutional status of Jammu and Kashmir in 05 August last year.

In June this year, at least 20 soldiers were killed and more than 70 injured in a bloody clash between Indian and Chinese troops on the Line of Actual Control (LAC) in the Gulwan Valley in eastern Ladakh.

In the midst of the confrontation, according to Indian officials, Chinese troops have occupied several areas of the LAC and are no longer ready to retreat.

During his recent visit to the Ladakh region, Indian Defense Minister Rajnath Singh had said that it seemed that China and Pakistan were creating problems under a mission on the border and India should be ready to face both.

India has held several military and diplomatic talks with China to defuse tensions, but so far no progress has been made.

The US Secretary of State and Secretary of Defense are due in Delhi later this month for talks with their Indian counterparts, which are expected to focus on relations with China and Pakistan.