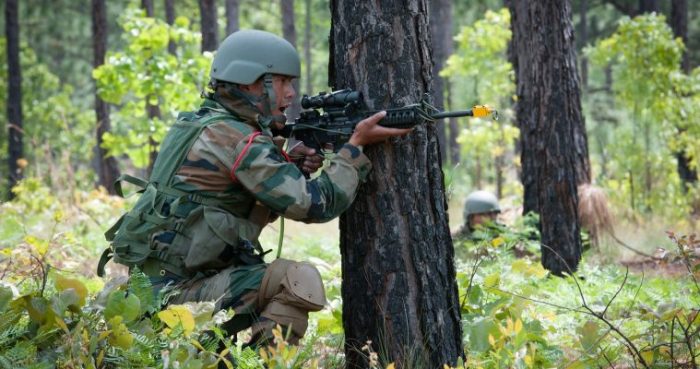 A jawan was killed in an encounter in Sopore of Jammu & Kashmir when militants engaged security forces on Friday. Two militants were also killed in the ensuing gunbattle. The encounter is underway, tweeted, Chinar Corps of the Indian Army.

The encounter comes just 24 hours after six militants were killed in two separate operations when they engaged security forces in the valley. While two were killed in Baramulla, four others were slain in Anantnag on Thursday.

Security personnel surrounded Athoora village in north Kashmir’s Baramulla district after receiving information about the presence of militants. “As security forces surrounded the hiding militants, they began firing triggering an encounter in which two militants were killed,” a police officer said.

The security forces did not suffer any casualty in the operation. The exact identity and the group with which the militants were affiliated to is being ascertained although both appeared to be locals, the officer said.

In the evening, security forces launched a cordon and search operation in Arwani village in south Kashmir’s Anantnag district after learning that some militants had taken shelter. When challenged, the terrorists fired at the security forces, provoking a gun battle in which four militants were killed, police said. “One of the slain militants has been identified as Sahil Makroo of Arwani village while the identity of the other three slain militants is being ascertained,” an officer said. “Three AK-47 rifles have been recovered from the militants.”

In a bid to disrupt the operation, locals started throwing stones at the security forces after the Arwani village gunfight. Security forces used tear smoke to disperse the mob. No casualty was reported during the clashes with the protesters.

The valley has been on a boil with encounters being reported every day. An Army jawan was also killed during the day in a sniper fire by militants in Tral area. The attack was carried on a Rashtriya Rifles (RR) camp in Luragam. Home Minister Rajnath Singh had visited the state on Wednesday and said that there has been a decrease in cases of stone pelting and recruitment of militants from the valley. Singh also reviewed the security situation on the Line of Control.

(with input from agencies)