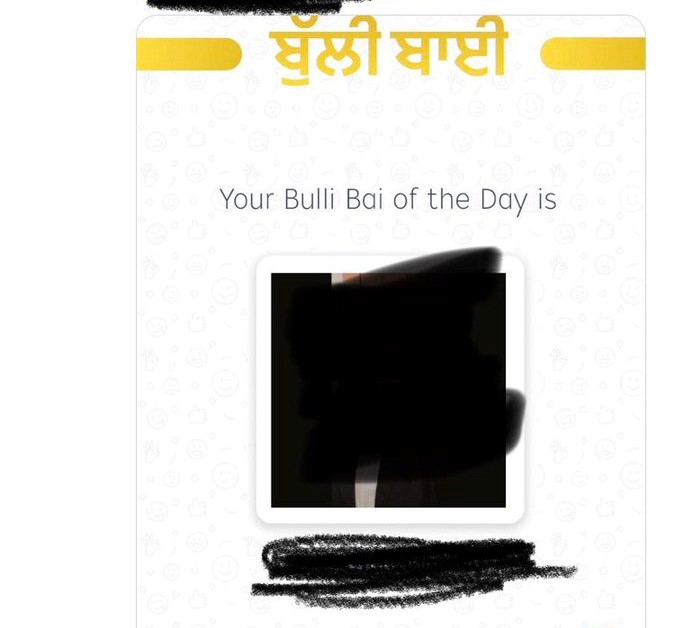 Ground Report | New Delhi: Bulli Bai Khalistani connection; For the second time in less than a year, pictures of Muslim women have been displayed on an app that appears to be an online ‘auction’. While the move has sparked outrage, the government has promised to act. The app, built on ‘Gut Hub’, is named ‘Bulli Bai’, a derogatory term used for Muslim women.

The arrested person, who was taken into custody from Bengaluru a day ago, has been identified as Vishal Kumar Jha. DCP Rashmi Karandikar of Mumbai Police Cyber Cell made the arrest after 10 hours of interrogation.

Mumbai Police arrested Vishal Jha from Bangalore. He was brought to Mumbai yesterday and is now being questioned. Police have said that the app has nothing to do with Sikhs, but the accused allegedly pretended to be linked to Khalistani groups.

While Bulli Bai’s Twitter handle has been suspended, its bio read, ‘Bulli Bai is a community-run open-source app by Khalsa Sikh Force (KSF)’. It is pertinent to note that the Bully By Twitter account had a hashtag that read #FreeJaggiNow in its Twitter name, and its banner image also had the same hashtag. (Bulli Bai Khalistani connection)

Mumbai Police has registered a case against unknown criminals under relevant sections of IPC and IT Act. On Sunday, an FIR was registered at West Mumbai Cyber ​​Police Station against the developers of the ‘Bulli By’ app and the Twitter handle sharing its content.

A case has been registered against unknown criminals under IPC sections 153 (a) (promoting hatred on grounds of religion), 153 (b) (causing damage to national integrity and unity), 295 (a) (deliberately doing a malicious act). Along with this, sections of 354D (chasing), 509 (insulting the modesty of a woman), 500 (criminal defamation) have been imposed. Apart from this, Section 67 (spreading obscene material) of the Information Technology Act has also been imposed. (Who is Vishal Jha)

Several opposition leaders, including Congress’s Rahul Gandhi and Shiv Sena MP Priyanka Chaturvedi, had spoken on the issue, urging the government to crack down on the platform and bring justice to those behind it.

IT Minister Ashwini Vaishnaw has said that the GitHub user behind the app was blocked and that “further action” was being coordinated. Mumbai Police has registered a case, Delhi Police is probing the matter and Delhi Commission for Women has issued notice to the police officials.