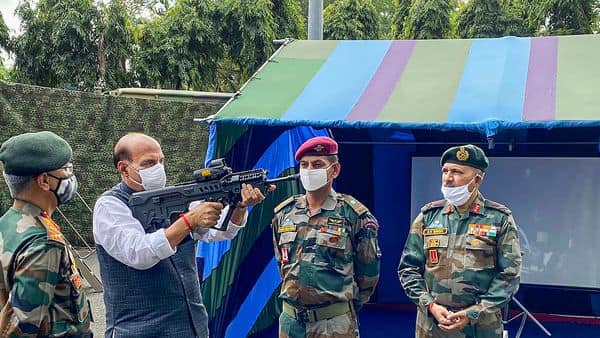 Defense Minister Rajnath Singh has said that ‘India wants to end its border dispute with China in East-Ladakh’, but at the same time he asserted that ‘Indian soldiers will not let an inch of their land go in the hands of any other country.

Defense Minister Rajnath Singh said this on Sunday during the ‘Shastra Puja’ held in Darjeeling district of West Bengal on the occasion of Dussehra. The puja was conducted at the 33rd corp headquarters of the Indian Army at Darjeeling.

Rajnath Singh has been doing arms worship on Dussehra for the last several years. He also performed this puja during the tenure of the previous NDA government as Home Minister.

After the puja ended on Sunday, Rajnath Singh told the press, “We want to end the border dispute with China and establish peace. Obviously this is our intention. But after a while, crooked Incidents happen and tension continues. I believe that our soldiers will not let even an inch of India’s land go into the hands of any other country. “

Military officials said that Rajnath Singh was to go to worship at Sherthang, a high-altitude border area near the Line of Actual Control in Sikkim, but could not go there due to bad weather.

On the occasion of arms worship, the Chief of the Indian Army General MM Narwane and other senior officers of the army were also present. Defense Minister Rajnath Singh inaugurated a new road in Sikkim through a video conference after ending his speech after arms worship.

He said, “I can say with full confidence and with strong information that the valor and courage displayed by Indian soldiers on the East-Ladakh border during Indo-China tension will be written in golden letters by historians.

Addressing a group of jawans on Saturday evening, Singh had said that ‘India has always strived to maintain good relations with its neighbors, but from time to time circumstances arose when the sovereignty and territorial integrity of the country His armed forces had to make supreme sacrifices for defense.

Tension has remained at the border between the two countries since 20 Indian soldiers were killed on 15 June 2020 during a conflict with China in the Galwan Valley of East-Ladakh.

Indian officials claimed that China had also suffered a lot in the Galwan Valley. But till date China has not officially revealed how many of its soldiers were killed in Galwan Valley.