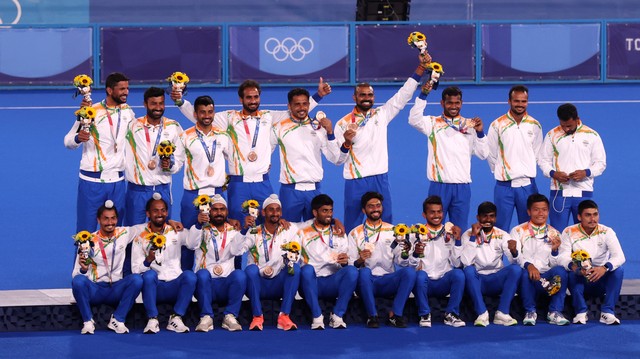 Ground Report | New Delhi: How India is rewarding its Olympic medalist; The victory of Indian athletes in the Olympics brings a sense of pride to Indians everywhere. They also bring with them some hefty rewards for killing hardworking people in Tokyo. The latest example of the same is weightlifter Chanu Saikhom Mirabai, who has so far won India’s only medal at the Tokyo Olympics 2020 and for which she has been rewarded with lavish cash prizes from her home nation and its various states.

India ranks fifth in the list of countries that give the highest award to Olympic winners, Indian Olympic Association (IOA) gives a cash prize of Rs 75 lakh to its gold medalists; 40 lakh to those who snatched silver, and Rs 25 lakh for the bronze medal-winning athletes. Additionally, India’s Ministry of Railways has announced a cash prize of up to Rs 3 crore for athletes and railway officials participating in the ongoing Tokyo Olympics.

How India is rewarding its Olympic medalist

This year’s biggest asset is now a reward for Olympic winners. Bitbns, an India-based cryptocurrency exchange platform, is offering a Systematic Investment Plan (SIP) in cryptocurrencies like Bitcoin and Ethereum to medal winners from India.

If there’s one thing we’ve learned this year, it’s that health is wealth. Glamyo Health, a healthcare startup with a network of over 200 hospitals across India, is providing free healthcare for life to all 127 competitive Indian athletes. Athletes can now receive 50 types of surgical treatments for free.

The theaters aren’t fully open yet, but it’s a minor inconvenience for the medalists, who are about to get lifetime free tickets. Inox Leisure, one of the largest movie theater operators in the country, has not only offered lifetime free tickets to Olympic winners but one-year free tickets to all participating athletes. You know, when they want to see their potential biopics on the big screen—hopefully, represented by actors of the right ethnicity, quite the opposite.

Giving building materials to medal winners is strange. But the idea behind it is a sweet sentiment nonetheless. Binding material company Shree Cement has offered free cement to all Olympic winners to build their dream home. While it’s still unclear whether they’ll actually offer the bricks, labor, and expertise needed to pull off these dream homes, you know what they say: You need to build a strong foundation to tower above the rest. Will happen.

ALSO READ: About 59% of Indian landmass is prone to earthquakes

On the other hand, this proposal is a bit more straightforward. Savji Dholakia, a billionaire diamond merchant from India pulled out houses and cars as an incentive for India’s women’s hockey team to beat Australia in the semi-finals. In a tweet, Dholakia promised to provide 1.1 million ($14,835) to each player to build their dream home. He offered players to buy a car for 500,000 rupees ($6,743) if they won a medal, although we’re not sure if this offer still holds up as the team didn’t finish with a podium finish.

After weightlifter Mirabai Chanu announced that she was excited to eat pizza to celebrate her silver medal, Domino’s Pizza decided to serve her free pizza. For life. Soon after his return he also sent pizza to his house in the Indian city of Imphal.