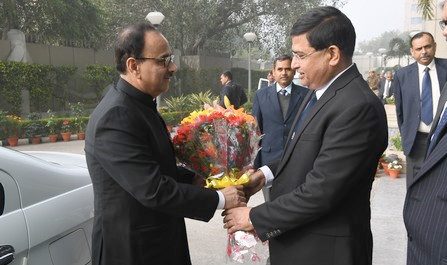 The Prime Minister Narendra Modi led government which has been grappling with issues surrounding the Rafale deal, is now facing another mammoth controversy ahead of itself. A war brewing within the nations top investigative agency, the Central Bureau of Investigation (CBI), which has gone public with its top two ranked officers leveling corruption and criminal allegations against each other, what is now being dubbed as CBI vs CBI.

CBI director Alok Verma was on Wednesday divested from his duties as he indulges in a legal battle with his deputy Rakesh Asthana. Verma has alleged that Asthana demanded a bribe of Rs 5 crore from a Hyderabad based businessman, to help him get his name cleared from the Moin Qureshi case. In a dramatic turn of events, Asthana and his boss Verma, both have been sent on leave by the government which said that the move was to maintain the “institutional integrity and credibility of India’s investigation agency.”

everything you need to know

What are accusations leveled by Alok Verma against Rakesh Asthana?

Alok Verma, who was appointed to the probing agency without any prior experience in CBI, has accused his deputy Rakesh Asthana of being indulged in corruption. According to The Indian Express, the current crisis dates back to 2017 when Verma’s suggestion to appoint certain IPS officers to CBI was set aside by the government. Exactly a year ago in 2017, Verma in a note to the Central Vigilance Commission (CVC), which oversees CBI, wrote about the appointment of Asthana as Special Director alleging corruption on his part in the Sterling Biotech case (the company was being investigated for loan fraud of Rs 5,000 crore). The note alleged that Asthana had accepted a bribe of Rs 3.88 crore by the company. However, the appointment was cleared by the CVC disregarding Verma’s note.

Breaking! As feared&suspected, the govt has removed the Director CBI from his charge, because he was pursuing corrupt Spl Director Rakesh Asthana who was foisted on CBI by PMO despite his being investigated by the CBI itself in corruption cases.Totally illegal. Will be Challenged pic.twitter.com/KyZgEUBpyF

Months late in June 2018, Verma once again came out against Asthana, writing to the CVC that he could not be represented by his deputy in panels and meetings in his absence as he was under probe. According to The Indian Express, the Director said that Asthana was being probed for alleged corruption. This time Asthana hit back writing to the Cabinet Secretary in August that Verma was interfering in his probes and had tried to stall a raid on Lalu Prasad in the IRCTC case. He also alleged corruption on Verma’s part. Less than two months later, Verma got an FIR registered against Asthana as an accused in a case of corruption.

Who are Alok Verma and Rakesh Asthana?

Alok Verma, who till a day ago was heading the CBI, is a 1979 batch IPS officer from  AGMUT (Arunachal, Goa, Mizoram, UTs)  cadre. Youngest officer of his batch at the time of joining the police service, Verma has served in various capacities holding a clean record. Verma had held the posts of Commissioner of Police, Delhi; Director General of Prisons, Delhi; Director General of Police, Mizoram; DGP, Puducherry and IGP, Andaman & Nicobar Islands.  However, his appointment came as a surprise for many, as without any prior experience of working in the agency, he was directly appointed to lead it.

The deputy director of the CBI, Rakesh Asthana comes from the Gujarat cadre and joined the Indian Police Service (IPS) in 1984. He has been at the forefront of some of the most important cases in the history of independent India which include, fodder scam, 2002 Godhra train burning among others. He was instrumental in the investigation of fodder scam which led to the conviction of RJD supremo Lalu Prasad Yadav. Asthana served in Gujarat when PM Modi was the state’s chief minister.

Impact of the ‘war’ over CBI

In just 24 hours, the CBI has seen its top two seniormost officers sent on leave, the appointment of a new interim director and transfer of DSP AK Bassi who was heading the probe against Asthana. The developments are likely to dampen the mood and work culture within the investigating body and will surely impact on the political ecosystem surrounding it. Alok Verma has challenged his removal from the post of director in the Supreme Court alleging that after the appointment of Rakesh Asthana as Special Director of CBI, decisions that were crucial to the progress of certain investigations were stymied by Asthana alone.

The opposition has launched an assault against the Modi government which appointed both Alok Verma and Rakesh Asthana. Congress president Rahul Gandhi alleged that Verma was removed from his post as he was gathering information on the Rafale deal. Gandhi tweeted, “PM removed the CBI Director to stop him from investigating Rafale. Mr 56 broke the law when he bypassed CJI & LOP. Mr Modi, Rafale is a deadly aircraft with a superb radar. You can run, but you can’t hide from It.”

PM removed the CBI Director to stop him from investigating Rafale.

Mr 56 broke the law when he bypassed CJI & LOP.

Mr Modi, Rafale is a deadly aircraft with a superb radar. You can run, but you can't hide from It.

Terming the removal of Verma as illegal, senior CPI-M leader Sitaram Yechury said, “The illegal removal of CBI Chief by Modi government to protect their own handpicked officer, against whom serious charges of corruption are being investigated, points to attempts at a serious cover-up to protect his direct links to the BJP’s top political leadership.” Meanwhile, WesMamata Banerjee said, “CBI has now become so called BBI ( BJP Bureau of Investigation ) – very unfortunate!”