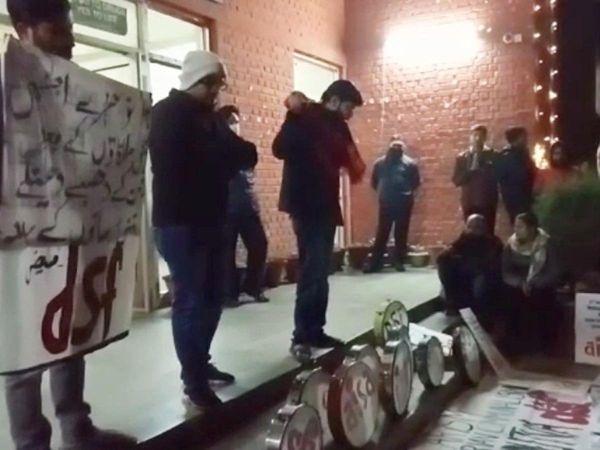 Ground Report | New Delhi: Babri Masjid reconstructed; The vice president of the Jawaharlal Nehru University Student Union (JNUSU), Saket Moon, has raised the demand for the reconstruction of the Babri Masjid during a protest by the student body.

The JNU student leader made the remarks during a harmony march on the night of December 6 that was held to commemorate the demolition of the Babri mosque and the anniversary of BR Ambedkar’s death.

ALSO READ: Called to school at night for ‘practical exam’, 17 students molested in UP

Moon delivered the speech as some JNU students gathered at a venue with banners and shouted slogans to protest against the demolition of the Babri Masjid. “… Compensation must be awarded. It must be accepted that the Babri Masjid demolition was wrong and it must be rebuilt,” Moon was heard saying in an alleged video.

In reaction to Moon’s comment, JNUSU Secretary-General Satish Chandra Yadav said that the union of the student body has nothing to do with his demand to rebuild the Babri Masjid. “The JNUSU did not file the lawsuit. It spoke about how the court accepted that the Babri Masjid demolition was wrong and said it should be built anew,” Yadav said.

Addressing the students who participated in the protest march, JNUSU President Aishe Ghosh took aim at BJP and said that after Babri Masjid, the next target of the saffron party is Kashi and that they have started working on it. (Babri Masjid reconstructed)

ALSO READ: Next pandemic could be deadlier than covid: British vaccine developer

“This is to emphasize that an unauthorized activity may disturb the communal harmony and peaceful environment of the university campus. Interested students/individuals are strongly encouraged to cancel the proposed program immediately, if they fail to do so, action can be taken. strict disciplinary according to the rules of the university Against those responsible for this fact. Students are also instructed not to provoke themselves with this pamphlet, which is unauthorized and unjustified “, reads the circular issued by the JNU.