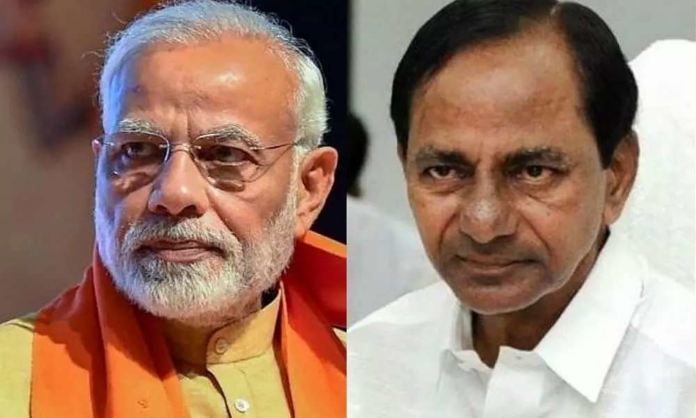 Ground Report | New Delhi: KCR Anti Modi; Telangana Chief Minister K Chandrashekhar Rao was absent at the reception of Prime Minister Narendra Modi at the airport here on Saturday. This is the second time in the last few months that the CM received the PM at the airport.

The political climate in Telangana has been heating up for the past few days. The war of words between TRS and BJP continues. Bullets of words are exploding between the two party leaders. Prime Minister Narendra Modi recently unveiled a statue of Sri Ramanujacharya at the Samatamoorthy Center under the patronage of Chinjiyar Swami at Muchhintal in the suburbs of Hyderabad.

‘Let’s Go National’ appears to be the aim of Telangana Chief Minister K Chandrasekhar Rao, who has recently gone ballistic against Prime Minister Narendra Modi and the BJP.

Chief Minister of Telangana. K Chandrashekhar Rao used to be someone the BJP could trust – so why has he suddenly gone ballistic? KCR, as he is known, attacked not only the BJP, or the Centre, but the PM, mocking his famous “Gujarat model” and alleging that the PM selects organizations on the basis of elections, which states that Like those who are going to vote.

Addressing a public meeting at Yeshwantpur in the Jangaon district, KCR said he was ready to play an important role in national politics to conquer the “Fort of Delhi” if the need arises. “You don’t give us a national project, you don’t give us a medical college… If you don’t cooperate with us, there is no problem. We will throw you out of power and bring in a government that helps us.”

KCR and his party, the Telangana Rashtra Samithi or TRS, have sided with the BJP on important matters in Parliament, voted with the ruling party and regularly sever ties with the opposition.

KCR is facing an aggressive state BJP leadership which targets him on several issues such as how much farmers are paid for food grains, not enough employment for youth, alleged family rule and concentration of power, alleged corruption. But he doesn’t want to raise the profile of these leaders, who are largely local, is seen reacting to their allegations, so he prefers to target PM Modi, whose popularity can get him votes in elections.

KCR insists that India will ‘react’ at the right time, as it did during the Emergency, and adds that his long-running campaign for the statehood for Telangana was driven by public support and participation. had gone, and he had inspired the youth, had shot them. Revolution was needed, and that is how Telangana was born, though many were dismissive of and ridiculed his efforts.