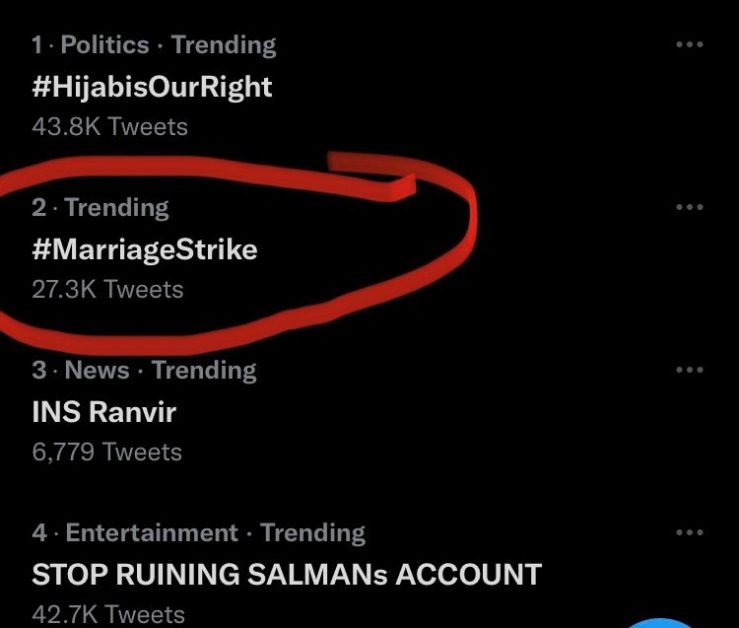 Ground Report | New Delhi: Why Marriage Strike is trending on Twitter; In 2014, the Delhi Commission for Women submitted a report stating that 53.2% of rape cases registered between April 2013-July 2014 were false. In India, the threat of false rape cases on one pretext or the other is increasing since the new amendment to the rape law in 2013. The fact is evident from the study of court judgments and media reports by fast track courts constituted across the country including Delhi.

In January 2021, Indore police registered a rape case after a 19-year-old girl alleged that she was abducted and gang-raped by five men and thrown on train tracks. A tenant of the house where she lived was arrested by the police after she claimed in her statement that she was one of the criminals. The girl kept changing her statement throughout the investigation and after much investigation, she and her inner partner revealed that they had fabricated the story. She was involved in a similar case earlier as well and got compensation of Rs 2 lakh from the government, so it is very possible that she has hatched a fake scheme to earn some more money.

Vishnu Tiwari of Lalitpur spent two decades in jail for a crime he never committed. In September 2000, police arrested Vishnu in a rape case in which the woman, her husband and her father-in-law testified that Vishnu had taken advantage of the woman in the field. He was charged with sexual and physical assault on a woman when she was five months pregnant. After 20 years, the Allahabad High Court, accepting the truth, released Vishnu Tiwari from jail.

According to the National Crime Records Bureau, a total of 38,947 rape cases were registered in India. In 10,068 cases – almost a quarter – women claimed it was rape on a false promise of marriage. In many cases, false rape allegations are the result of parents hiding the “shame” of having sex with an unmarried daughter.

The term “marriage strike” refers to a movement by young men not to marry, for fear of financial ruin from subsequent divorce and false cases.  A perception that marriage is a financial disaster for men, especially during divorce settlements, is generally believed to be driving the marriage strike phenomenon.

Another user wrote “This is the Gynocentric social order wrongly labelled as patriarchy since it benefits funding to feminist NGOs and their charlatans. #MarriageStrike”

“To all those planning on #MarriageStrike, you will find equal support from women. Even we don’t want to get married Bec we are afraid how our husband will treat us, how our in laws will treat us. Point is everyone has their own fears, u marry someone Bec u love them & have faith” another user said.