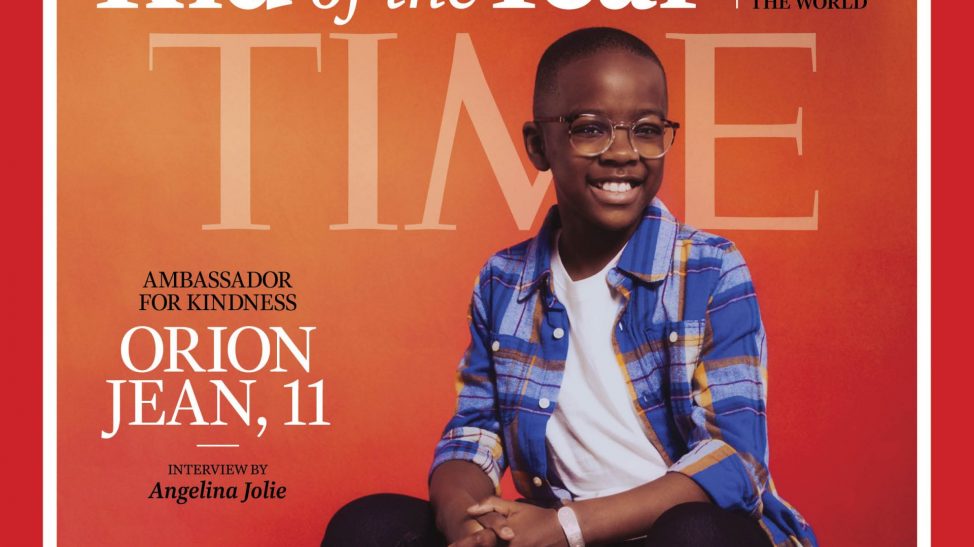 Ground Report | New Delhi: Who is Orion Jean Time kid; Every year Time magazine highlights the girl or boy of the year and this 2021 we already know the winner. At just 11 years old, Orion Jean was highlighted by the publication. Interviewed by Angelina Jolie for the publication, Orion was chosen for his humanitarian action. “If you have a problem, fix it” is his motto and with that, he sums up the origin of his work.

And it is that Orion’s work draws attention to his young age: he sees himself as an ambassador of kindness and gives his help where he sees a need. For example, he collected and donated 100,000 meals to families in a context of food vulnerability; or he delivered 500 thousand books to children who do not have them at home, all in the midst of the pandemic.

He told Time magazine that everything started during the health emergency. There, every day he came home from school, he would see on the news people losing their jobs, access to housing and food.

“I knew at that moment that I wanted to do something to help, but the opportunity presented itself when my teacher suggested that she enter a speech contest. And if I won the prize money that came with the contest, that means I could start a kindness initiative to help these people.”

That was the beginning of his “race towards goodness” with which he seeks that we all get involved and change the world in a positive way.

“Someone told me that you have to find something that breaks your heart to really go out there and make a difference in that area. And I want others to know that they can start today. If there’s an issue or a problem or something they see that they want to resolve, all it takes is knowing deep down that it’s something you care about, and you can go out there and get started,” said Orion Jean.

Although he acknowledges that his friends know little about his homework, he does hope that more like him will join causes like this: “I hope that inspires them to know that, hey, a kid like me can go out there and really make an impact. It’s not about me, I’m just a vessel to spread kindness and help others spread kindness in their communities as well.”

But it is not the only thing that stands out about him. He has already written a book on leadership, in part because he has always loved to read. But also because he hopes that everything he has learned will help him become one. “I hope that at this time he can be a leader and inspire many other children to become leaders as well,” he said.

On Wednesday, Jean, along with the other top finalists, was recognized in the Kid of the Year television special, hosted and produced by Trevor Noah. The TV special, which aired on Nickelodeon, featured celebrity guests Charli D’Amelio, Scarlett Johansson, Meghan Trainor, 2020 Kid of the Year, Gitanjali Rao and more.

To help celebrate the top five Kid of the Year finalists, Nickelodeon stars Alaya “That Girl Lay Lay” High, Dylan “Young Dylan” Gilmer, and Wolfgang Schaeffer also participated in the special as part of a committee of kids.