Home » Who is Marina Ovsyannikova, journalist who spoke out against Russia?

Who is Marina Ovsyannikova, journalist who spoke out against Russia? 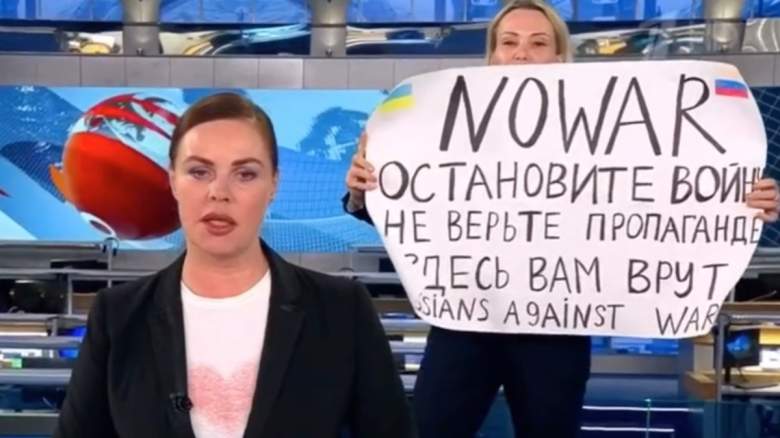 Ground Report | New Delhi: Who is Marina Ovsyannikova; The main evening news program on Russian state television was interrupted on Monday by a woman holding a sign against the war in Ukraine. The woman was identified by the OVD-Info website, which monitors political repression in Russia, as Marina Ovsyannikova, the network’s editor. The website said Ovsyannikova has been detained and is in police custody.

The sign he held read: “No to war. Stop the war. Do not believe in the propaganda, here they are lying to you”. The phrase “No to war” was in English, the rest in Russian. Before the protest, Ovsyannikova published a video, broadcast by OVD-Info and posted on the Telegram platform, where she explained that her father is Ukrainian and her mother Russian, before adding that “they have never been enemies”, pointing to her necklace, with the colours of the Russian and Ukrainian flags combined.

“What is happening now is a crime,” he said. “Russia is an aggressor country and Vladimir Putin is solely responsible for that aggression.” In the recording he describes the war as “fratricidal” and says that “we Russians think and are intelligent people.”

“Unfortunately, I have spent many of the last few years working for Channel One, doing propaganda for the Kremlin, and I am deeply ashamed of this,” she said, according to a translation. “Ashamed that I allowed lies to come out on the TV screen. Ashamed of having allowed the zombification of the Russian people.” “We Russians are thinking and intelligent people,” he added. “It is in our power to stop all this madness. Go protest. Don’t be afraid of anything. They can’t lock us all up.”

Who is Marina Ovsyannikova

Marina Ovsyannikova, a journalist for Russia’s Channel 1 state television, broke into the live broadcast of the Vremya nightly news, the most-watched in the country, on Monday, shouting “Stop the war!” and “No to war!” while she showed a poster with messages to the same effect, which is an extraordinary act of protest against Putin’s decision to invade Ukraine.

Ovsyannikova appeared behind the show’s host, Yekaterina Andreyeva, a veteran journalist who has been at the helm of the news program for more than two decades. While Ovsyannikova protested her, Andreyeva continued to read the news rundown as if nothing unusual was happening on the set.