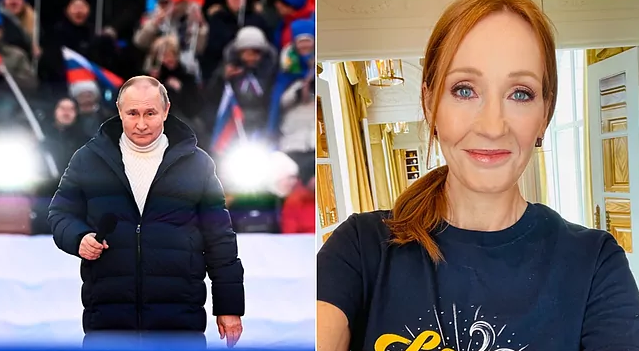 Ground Report | New Delhi: Cancel Culture; JK Rowling has responded to Vladimir Putin after the Russian president quoted her in a wide-ranging speech criticizing “cancel culture”. In a televised meeting on Friday, Putin compared recent criticism of the Harry Potter author to that faced by pro-war Russian composers and writers.

In response, Ms Rowling denounced the invasion of Ukraine in which she said Russia was “killing civilians”. Rowling has been criticized for her views on transgender issues.

“Criticisms of Western cancel culture are possibly not best done by those currently killing civilians for the crime of resistance, or jailing and poisoning their critics,” the Harry Potter author wrote on Twitter.

In the long speech, which was given to the winners of various cultural awards, President Putin claimed that Russian composers and writers were being discriminated against.

Few terms have been as abused as “cancel culture.” Its very existence is a point of contention, even though the vast majority, both on and off-campus, feel pressured to self-censor for fear of losing their jobs or reputations. But it is a real thing, no matter how many ways its meaning has been wrongly distorted.

Conductor Valery Gergiev, who attended Friday’s meeting with the president, was fired from festivals, concert halls and management after he failed to condemn Russia’s invasion of his neighbour.

And earlier this month, a Welsh orchestra pulled music by the Russian composer Tchaikovsky from a concert because of the war. “There were two military-themed pieces… which we felt were particularly inappropriate at this time,” the Cardiff Philharmonic Orchestra said in a statement.

“When the humanitarian crisis is over, the discussion about ‘waking up’ and ‘cancel culture’ can have its place,” he added. The Russian invasion, which is entering its second month, has caused a major humanitarian crisis with more than 10 million people displaced.

What is cancel culture?

In a nutshell, cancel culture is the idea of ​​taking away an individual’s support, career, popularity, and/or fame because of something they have said or done that is considered unacceptable.

Most of the time, people are “cancelled” because they are a public figure with influence over a large audience and what they have done or said is alleged to have caused harm to a particular person, group of people, or community. For example, many of those who have been “cancelled” have received this public backlash following accusations of violent, sexist, racist, homophobic, or transphobic comments or activities.

Participation in cancel culture is seen by some as the most effective way to hold public figures to account, especially if no other legal means seem to be working. By making the complaint public, you force the defendant’s employers and others to confront the situation and distance themselves from the perpetrator. In other words, it rebalances the power gap between those with large audiences and the people or communities that might be negatively affected.