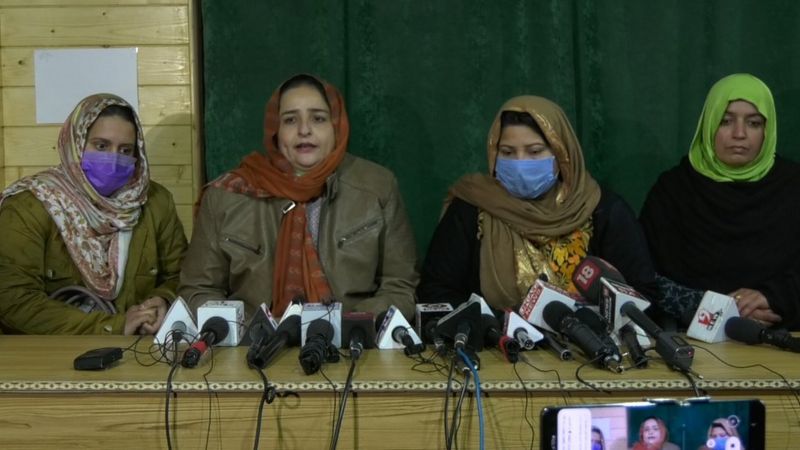 In the 1990s, large numbers of people from Kashmir migrated to Pakistan-administered Kashmir and other parts of Pakistan. These young people not only settled here but also got married.

The marriages continued successfully until former Chief Minister of Jammu and Kashmir Omar Abdullah announced a general amnesty for Kashmiri militants who had refugee status in Pakistan.

In 2010, the government announced a scheme called ‘Militant Rehabilitation’ so that Kashmiris who went to Pakistan could return to Kashmir provided they renounced armed violence. Through this scheme, many Kashmiri youth returned to Kashmir illegally, but with the tacit support of the government, including their Pakistani wives and children.

“I started working at a private school here. But when I came here, I found out that we have actually become stateless, we are not allowed to go back and we do not have civil rights here.

Tayyaba Ijaz, who is highly educated in banking and hails from Abbottabad, Pakistan, is currently living with her Kashmiri husband and three children in Patan district of Baramulla.

Tayyaba Ijaz was among the women who once again demanded their travel rights at a press conference in Srinagar on Monday and announced a march on behalf of the LOC if not met.

Saira Javed, appealed to the Government of India that ‘first we were brought here under the resettlement scheme, now we are called’ Militant ‘ wives and illegal immigrants. We have repeatedly said that if we are illegal immigrants, you will have a law, punish us and then let us go back home with our husbands and children.

“If that doesn’t happen now, we will march on the Line of Control, including the children, and the whole world will see how anxious we are,” She said. We will not leave, or we will meet our parents or be shot.

She said that the Pakistan embassy has been writing to the foreign Minister almost every month, seeking permission to the women to visit their homes. “We want the government of India to allow us to return home to meet our dear ones there. The government has rejected us as citizens and it makes no sense for the authorities to stop us from deporting back to our residential places.

Iram Sayar, 34, who lives in Shopian district, 60 km south of Srinagar, could not hold back her tears as she narrated her past. She says that when she returned to Kashmir with her Kashmiri husband and six-year-old daughter Falak, her husband Sayar Lone was detained at the police station for three weeks.

“Now, as soon as we light our separate stove, we teach our daughter. Planet’s parents also helped financially. But in Rawalpindi, my father has a heart condition and doctors say he is a guest for a few weeks.

The other side of the picture is that two of these women also participated in the recent elections for local bodies. However, the election results of both are delayed.

Sumia Sadaf from Pakistan-administered Kashmir contested for the Development Council from Batargam district of Kupwara while Shazia Akhtar contested in Bandipora.

However, on the day of the election results, the results of both the seats were postponed. The women contesting the elections alleged that this was done because of their Pakistani affiliation, while an order issued by the Jammu and Kashmir Election Commission office said that the counting process was delayed only because of the nomination forms. Some of the information I entered was incomplete.

The Jammu and Kashmir government is now considering a new policy to encourage militants from the state to give up arms, by providing them with a monthly stipend of Rs 6,000 among other benefits.

According to the draft, the policy details the need for rehabilitation through a two-pronged approach including reformative measures and opportunities of livelihood. However, this initiative will not cover militants found to have been involved in “heinous crimes”.

The problem lies partly in the gaps left by the rehabilitation policy. In 2017, the state government revealed that only 377 former militants, along with 864 family members, had returned from Pakistan since 2010. They had all come via Bangladesh and Nepal, however, and not by the approved routes for “inexplicable reasons and difficulties”. So, the government made them ineligible for benefits under the policy.

So in 2010 the then Manmohan Singh government allowed such Kashmiri youths to return to Kashmir, all of whom returned to the valley with their Pakistani wives and children. However, when these women came into politics for an equal place in society, they faced various difficulties.