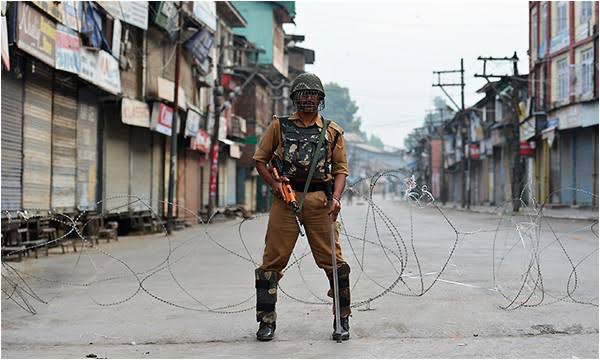 Five people were killed in Kashmir valley on Wednesday, thought to be the deadliest day since it was stripped of its autonomy August 05 after Special status of Jammu and Kashmir abrogated by central government.

Two non-Kashmiris – an apple trader from Punjab and a migrant labourer – were killed in separate attacks by suspected militants in Shopian and Pulwama, south Kashmir.

A second apple trader was in a critical condition.

Kashmir has been under a security lockdown since 5 August when the BJP led central government scrapped special status of Jammu and Kashmir. Postpaid Mobile phone services were restored on Monday after a 72-day blackout but internet services remain suspended.

Before Delhi’s announcement that it was to remove Kashmir’s autonomy, the leader of the region’s largest militant group, Hizbul Mujahideen, had warned that the move would make Indians in the territory legitimate targets.

Officials argued that removing Kashmir’s special status, which granted it its own constitution and rules protecting land ownership, would bring greater development and rid the state of terrorism.

Some policy experts say the high death toll on Wednesday undermines such pledges. “The government’s claims are really falling flat,” said Khalid Shah, an associate fellow at the Observer Research Foundation. “My sense is that the violence is only going to increase, it’s not going to decrease, and to what extent, where it leaves Kashmir, is very difficult to say.”

An insurgency has waxed and waned on the Indian-administered side for three decades, and tens of thousands of people have been killed. Critics say Delhi’s actions have undermined the political mainstream and created fertile ground for militant groups.

Kashmir’s most prominent political and business leaders as well as the president of bar association are all in detention. Officials said such detentions were to prevent unrest, but others warned of a dangerous power vacuum.

From the late-1990s, as the long militancy in Kashmir ebbed, migrant labour had begun to arrive in Kashmir, feeding, in the main, a booming construction sector.

The risks were not small: In August 2000, the Lashkar-e-Taiba killed 28 migrant workers in southern Kashmir. Twelve brick-kiln workers from Madhya Pradesh and Uttar Pradesh were killed at Sandu, near Anantnag; while six Nepali workers were shot dead at Lasjan, near Srinagar.

In 1994, militants shot dead 16 Hindu bus passengers at Sarthal village, near Kishtwar. From 1996 to 200, over 131 lives Hindus were killed in communal attacks by militants. Finally, between May and August 2001, militants carried out a series of four massacres around Kishtwar, in which 32 Hindus were killed. Hundreds died in similar attacks in Poonch and Rajouri, too.