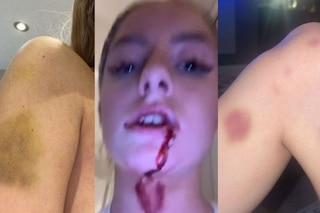 The voices of Robson and Greenwood can be heard in the audio clip. “Put your legs up,” said Greenwood. “No, Mason, I don’t want se*,” the woman replies. “I don’t give a f what you want… push me off you one more time and see what happens to you.” Manchester United have said in a statement that they are aware of the images and audio fragments released by Robson. A spokesman said he “would not condone any form of violence” but declined to comment “until the facts are established.”

Greenwood, 20, is one of United’s most promising prospects, with the Red Devils even reportedly refusing to invest in another young striker as they consider him a “very talented player”.

It comes after her father said she was “completely devastated” after sharing pictures showing cuts and bruises he said the 20-year-old England striker caused.

According to Daily Mail, Manchester police visited Greenwood’s home after the videos surfaced. Two officials turned up to find out what happened between Robson and the English footballer.

Greater Manchester Police issued a statement to Mirror Football which did not confirm any names but said they were looking into the matter.

The statement said: “Greater Manchester Police are aware of images and videos circulating on social media. Inquiries are underway to establish the full circumstances.

“Sportswear giants Nike, which sponsor the player, also issued a statement to The Athletic which said: “We are deeply concerned about the disturbing allegations and will continue to monitor the situation closely.”

The couple had been dating since school where they first met at Mersey School in Greater Manchester, but they split in 2020 before the Greenwood debacle with England. In his first call-up to the national team, the striker snuck two Icelandic models into the team hotel along with Phil Foden despite strict quarantine instructions.

Meanwhile, on social media, Manchester United and soccer fans gave no respite and called for the 20-year-old to be punished.

Manchester United have issued a statement that reads: “We are aware of the images and accusations circulating on social media. We will not comment further until the facts have been clarified. Manchester United does not condone violence of any kind.” The post with the images was deleted approximately two hours after it was published, but the screen recording continues to circulate through various outlets.