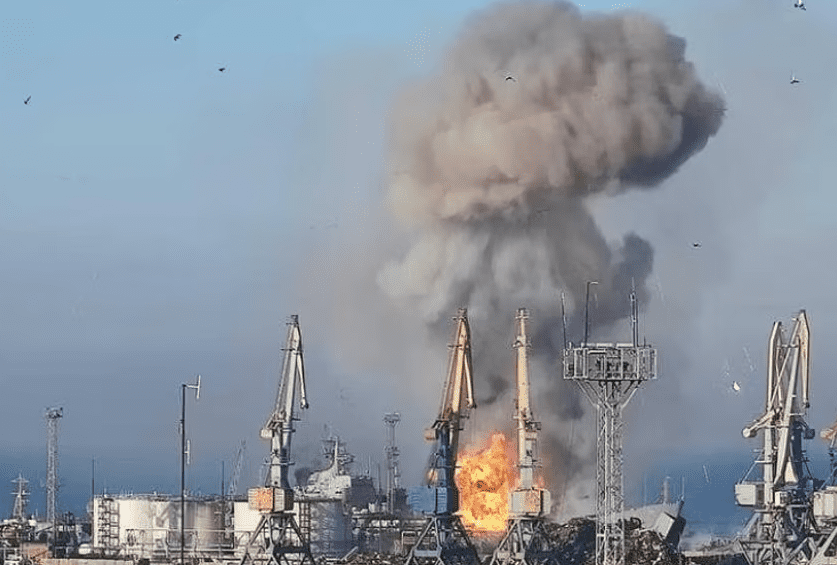 Ground Report | New Delhi: Destroyed Russian Ship; A Russian ship full of ammunition reportedly explodes in Ukraine as Putin’s humiliated Navy is forced to withdraw. In one video, the tanker, named Orsk, is on fire as black smoke can be seen coming from the port in occupied Berdyansk.

“The Russian occupiers’ large landing ship Orsk was destroyed near the port of Berdyansk,” the Ukrainian Navy said in a Facebook post on Thursday, without providing further details.

Accompanying the post was a video purportedly showing the port on fire where a small explosion could be seen. It was unclear if there were any casualties. Russia did not immediately comment on the claim.

Local media reports indicated that a Russian ship had sunk and two others were on fire after an ammunition depot and a fuel depot were attacked. The Ukrainian state news agency Ukrinform reported two powerful explosions at 6:40 a.m. local time on Thursday and said the explosions were heard throughout the city.

Russian troops captured the port on February 27 and the Orsk, classified as an alligator-class landing ship by NATO, had been docked there since Monday, the Russian armed forces media outlet Zvezda said earlier this week.