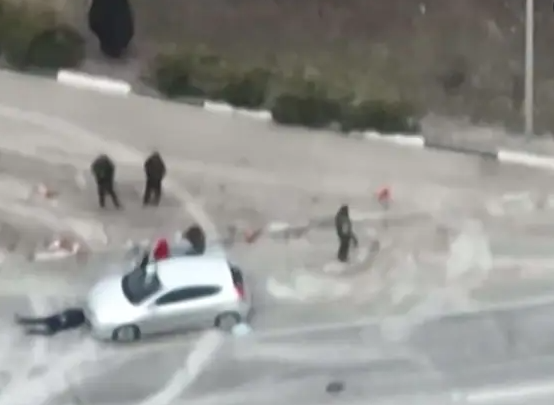 Ground Report | New Delhi: Russian soldiers dead civilian; A drone with a camera observed the murder of a civilian by Russian soldiers near Kyiv. Suspicions of war crimes in Ukraine are growing stronger. The harrowing clip, which we chose not to show, shows the man getting out of his car and giving up before falling to the ground almost immediately.

There are two individual clips, one-two minutes long, the other almost four minutes long. What they show is shocking: it is March 7, 2022, in the early afternoon. A Ukrainian surveillance drone is filming the E40 highway a few kilometers west of Kyiv.

North of the highway, the Russians have taken control of the Kyiv suburbs. They have advanced to the road. The drone films the position of a Russian tank a few meters from a gas station, the tank bears one of the typical white identification marks of the Russian forces in Ukraine. In front of him: a blue car, apparently damaged by bullets. And in the forest beside him: the small but distinctive silhouette of soldiers carrying rifles can be seen.

The video was obtained by the German broadcaster ZDF. The outlet reports that the incident appears to have taken place on the afternoon of March 7, on the E40 highway on the outskirts of Kyiv.

Also Read:  What is happening in Eastern Ukraine?

Footage shows a Russian tank parked near a gas station as a man in a silver vehicle turns around and stops. He can be seen getting out of the car with his hands up, but a few moments later he falls to the ground after being shot.

Russian soldiers can be seen approaching the man and then dragging his body to the side of the road. The outlet spoke to the drone operator, a Ukrainian volunteer from the “Bugatti Company”.

He showed them the device, a Mavic III, and said that he had been tasked with observing Russian positions on the E40 highway. Footage later showed a woman and child who were also travelling with the man being led by soldiers into a nearby forest, but it is unclear what happened to them, ZDF said. (Russian soldiers dead civilian)