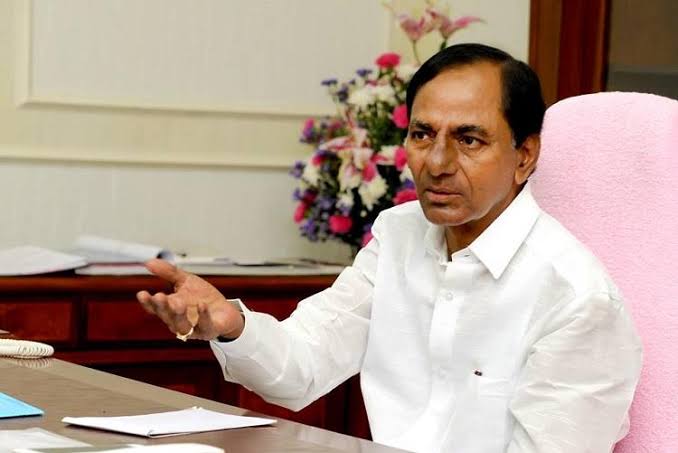 A day after the authorities at the National Institute of Technology (NIT) campus in Srinagar ordered the suspension of classes till further orders, the non-local students began vacating the premises on Saturday morning.

Reports said that as many as 26 JK SRTC buses arrived at the campus early morning to ferry students to Jammu.

“This is for information of all the students of the institute that the classwork for all courses stands suspended till further order. The above notice stands issues in accordance with the instructions received from the District administration Srinagar,” reads an order issued by NIT’s Registrar on Friday evening.

Meanwhile Telangana Chief Secretary SK Joshi issued a statement saying all 130 students from the state studying at National Institute of Technology (NIT), Srinagar, will be brought back home safely. They will be shifted to Delhi by special buses and take a train to Hyderabad from there, he said.

The statement said officials concerned have been asked to take immediate steps to shift the students to Telangana Bhavan in New Delhi and bring them home safely. The students are in touch with officials over phone and are already said to have left from Srinagar for Jammu. 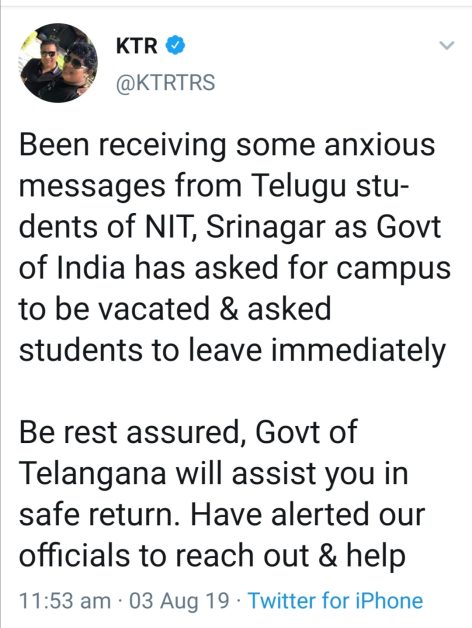 Earlier in the day, Telangana Rashtra Samithi (TRS) working president KT Rama Rao wrote on Twitter that students were seeking help to return home safely and that he had instructed officials to do the needful.

NIT suspended its classes till further orders in view of the uncertain situation in the Valley. “This is for the information of all the students of the institute that the class work for all courses stands suspended till further orders,” an order issued by the Registrar of NIT on Friday read.

“The above notice stands issued in accordance with the instructions received from the District Administration Srinagar,” it added. However, Srinagar District Magistrate Shahid Iqbal Choudhary said no instructions were given to shut the institute.

“In wake of unstoppable rumours, heads of all institutions were advised in the day to remain careful. No advise/instructions for shutting down any institution. This NIT notice is apparently a miscommunication,” Choudhary said on Twitter.

Soon after the NIT order citing “instructions” from district administration, Srinagar Deputy Commissioner Shahid Chaudhary clarified it as “apparently a miscommunication.” “In wake of unstoppable rumours, heads of all the institutions were advised in the day to remain careful. No advise/instructions for shutting down any institution. This NIT notice is apparently a miscommunication,” Chaudhary said on Twitter.

Since early morning, NIT students with their luggage were waiting inside the campus for the busses. “We saw the notification yesterday in our group about the class suspension and buses will arrive here in the morning to take us to Jammu. I am getting frequent calls from my family to come back home immediately,” a civil engineering student at NIT from Andhra Pradesh at the campus said. “