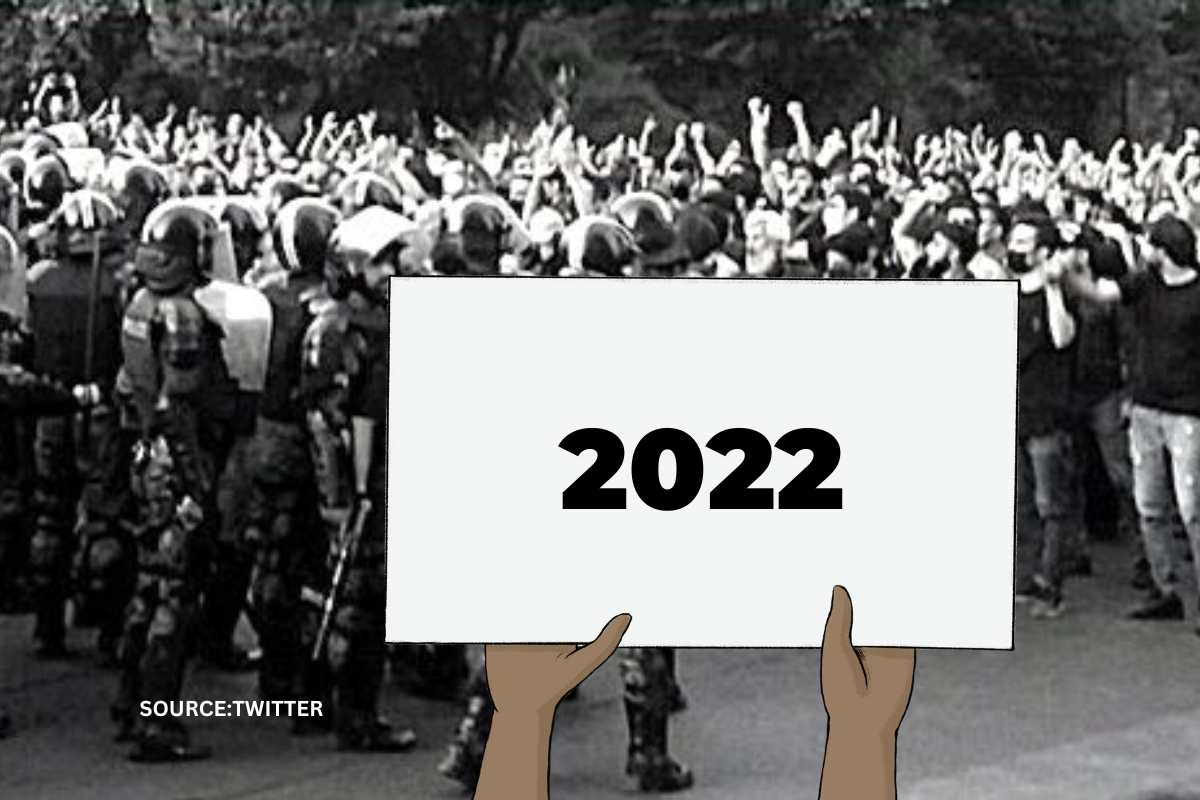 Citizen protests of 2022: The year 2022 was full of optimism coming back from a deadly pandemic. Although, the international community, across boundaries, had to fight for their basic rights. From basic education to the right to wear what they want, the fights were consistent and constant.

Mahsa Amini, 22, a Kurdish-origin woman from the northwestern province of Kurdistan, was in Tehran for a business trip. She was arrested by the morality police, known as the “Gasht-e-Ashab”, on charges of being “immodestly dressed”.She was soon admitted into an ICU for her injuries caused by the police. She died in the hospital after falling into a coma for three days. Soon after her funeral the mourners removed their headscarves and chanted “death to the dictator”

Soon the protests spread in the country. The protests then spread to Tehran University, where people were heard chanting “woman, life, freedom.” Protests grew more violent as security forces and demonstrators clashed in cities across Iran, including Rasht, Tehran, Isfahan, and Mashhad.

It has been over 100 years since the protests started. And, the incident has sparked rage not only in the country but on an international level.

Human rights and the rights of women are under the spotlight again. The International community and athletes of Iranian descent have shown solidarity with the movement through acts.

For instance, not wearing hijab anymore, cutting their hair, and the football team of Iran not singing the national anthem.

Read more: Mahsa Amini’s death – A breakdown of events leading up to the revolution in Iran | The Financial Express

Even amidst all the criticism, the Iranian government has taken shocking decisions like executing several other protestors and continuing to morale police women in public spaces. As the resistance goes on it again highlights the idea that women in society are still controlled by institutions and systems. Furthermore, if these institutions aren’t talked against will only negatively affect the next generation of women.

Peru is in a deep political crisis, which began after the impeachment of their then-newly-elected president Pedro Castillo. Castillo was removed from office by the Peruvian legislature on December 7 after the left-wing leader announced plans to dissolve Congress and rule by decree. His removal, as well as his subsequent arrest and detention on charges of “conspiracy” and “rebellion,” sparked widespread protests and prompted the government to declare a state of emergency across the country.

The country is on the roads protesting against the coup. Protesters have shut down airports and highways around the country, particularly in the rural south. The protest has also grown extremely violent and has seen 22 deaths up until now (29 December).

The recent impeachment is not the first but is just the most recent episode in Peru’s political turmoil. The country has seen multiple leaders impeached and arrested under charges of corruption. Peru has had six presidents in the last six years. The protests, as much as they are anti-coup, are also about people’s frustration over the political fabric of the country. As the situation in Peru has come undone over the last decade or so, people demand stability.

In February 2022 Sri Lankans took to the street to call for the resignations of then President, Gotabaya Rajapaksa and Prime Minister, Mahinda Rajapaksa, and for accountability for corruption, enforced disappearances, extrajudicial killings, and police misuse of force, amongst other causes. People were restless due to rising prices, and an unprecedented economic crisis that was engulfing the country.

For months, Sri Lankans had already protested the economic crisis that had resulted in severe shortages of many essential imported items such as medicines, fuel, and cooking gas. In July, thousands of people stormed the presidential residence, forcing then-President Gotabaya Rajapaksa to flee and later resign. The newly elected president Ranil Wickremesinghe is also not a popular choice among the citizens because of his connections with the former president and the lawmakers that supported him.

Thousands of protesters also walked on streets in the capital city of Colombo in October. Trade union and civil rights activists, university students, and others marched in the streets before joining a rally in Colombo to condemn the government’s intimidation of protesters and failure to alleviate people’s economic woes.

India also saw numerous citizen-driven protests in the last two-three years. The protests shaped the current discourse in the country.

These community-driven protests restore faith in humanity or humankind. While the discourse on climate change is prevalent, people fighting for basic rights is ironic. The politicians and the system have to be held accountable. Maybe that only happens through people and citizen-driven protests.