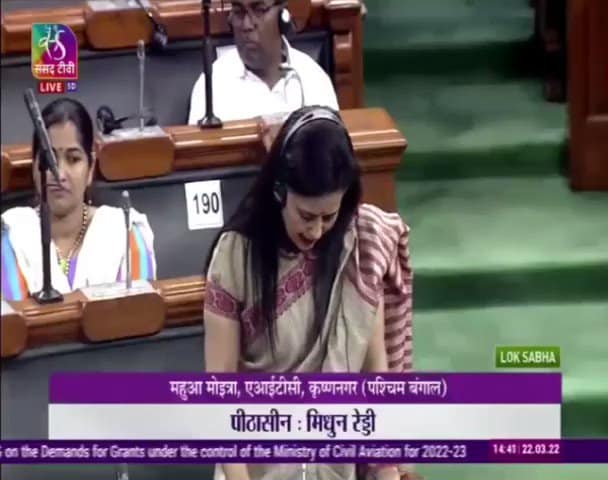 Ground Report | New Delhi: Trinamool Lok Sabha MP Mahua Moitra said in the Lok Sabha on Tuesday that former Prime Minister Atal Bihari Vajpayee’s worst fears have come true in his own party’s government as the government has turned parliament into the Rome Colosseum where ministers Azam enters like a gladiator. Slogans of “Modi, Modi”.

Mahua Moitra quoted former Prime Minister Atal Bihari Vajpayee’s comments in Parliament in 1972 when he said: “These days the atmosphere in New Delhi is stifling. It is not easy to breathe freely. The chanting of a prime minister’s name on All India Radio from morning to night, saturated propaganda on cinema screens, how can people sitting in opposition fight this?

Moitra said: “Perhaps it is India’s greatest tragedy that the same party that Vajpayee ji led as Prime Minister, today leads a government that has turned this very Parliament into the Colosseum of Rome in the first century, where he enters like a gladiator the honorable prime minister to the chants of Modi, Modi.”

Participating in the discussion on the demands for grants for the Ministry of Civil Aviation, 2022-23, Moitra also listed the names of women who have etched their names in the annals of Indian civil aviation history, saying they are the ones who “truly deserve” applause.

Moitra made the comment in an oblique reference to Prime Minister Modi’s cheering in the Lok Sabha at the start of the second phase of Parliament’s budget session after the BJP’s four-state victory. In five state elections, BJP won a historic victory in UP, Goa, Uttarakhand and Manipur. BJP is angry about this.

Vajpayee had said in 1972 that

“The election results have put extraordinary power and authority in the hands of the Prime Minister.” All power is concentrated in New Delhi. Union ministers have been confined to courtiers in the Delhi Durbar.