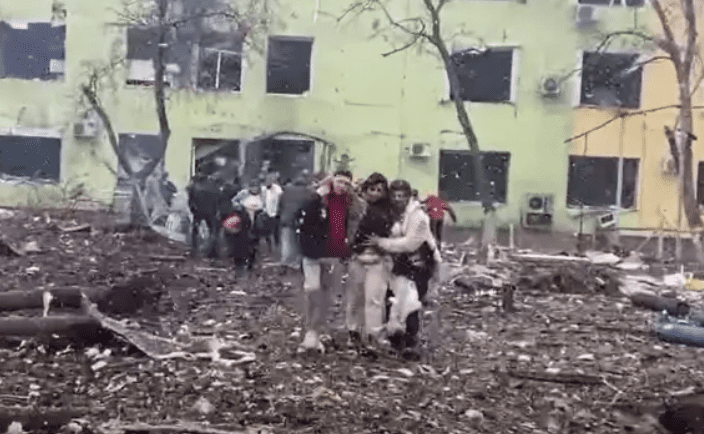 Ground Report | New Delhi: Russian forces attack Mariupol; In yet another offensive by Russian forces, an art school that housed around four hundred people in Mariupol, in southeastern Ukraine, was destroyed in the last few hours. The news was provided by the city council this Sunday, which was unable to inform, however, the number of victims of the attack, but it is known that there are people under the rubble. The port city faces one of the most dramatic situations since the conflict began on February 24, without water or electricity supply.

In a message via Telegram, the Mariupol municipal administration stated: “Yesterday (Saturday), the Russian occupiers dropped bombs on the G12 School of Art in the Mariupol Left Bank district, where around 400 Mariupol residents were hiding — women, children and elderly. It is known that the building was destroyed, and peaceful people are still under the rubble. Information on the number of victims is being clarified.”

The attack on civilians comes at a time when Russia is trying to contain its own losses and intensify its hold on Ukrainian territory. Russian forces have yet to seize any of the country’s ten largest cities. In the midst of this context, Russia reported having used this Saturday, 19, for the first time, Kinzhal hypersonic missiles.

According to information from the state agency Ria Novosti, the attack aimed to destroy a weapons storage site in the west of the country. A Ukrainian army spokesman confirmed the attack on the weapons depot, but not the type of missile used.

Taking over the Mariupol region is of strategic importance to the Russian government. Once conquered, Vladimir Putin‘s forces would have in their hands one of the largest ports in Ukraine and could even create a land corridor linking the Crimean Peninsula, annexed to Russia in 2014, to Luhansk and Donetsk, in the east, controlled by Russian-backed separatists.

This Sunday, the 20th, the Russian army also attacked an Azovstal steel and metallurgy factory in Mariupol. In a video posted on her Twitter showing columns of smoke over the industrial complex, MEP Lesia Vasilenko said: “One of the most important metallurgical industries in Europe is destroyed. The economic losses for Ukraine are immense.” Ukraine’s President Volodymyr Zelensky said Saturday night that the siege of Mariupol “is a terror that will be remembered for centuries”. (Russian forces attack Mariupol)