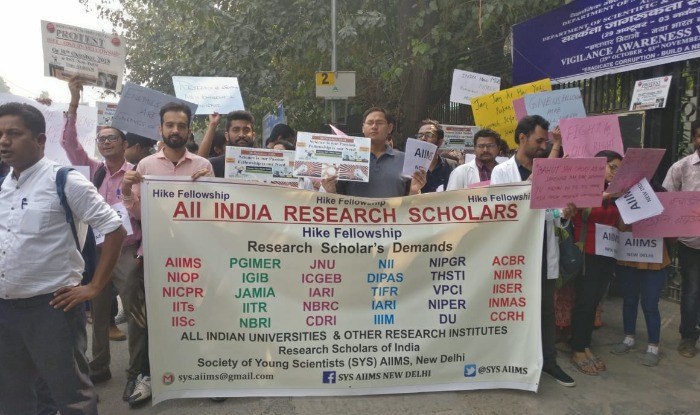 New Delhi, 11 November। Fellowships granted to students qualified from National Eligibility Test (Net / NET), Graduate Aptitude Test in Engineering (GATE) and other examination have not been increased since last four years. However, the prices of various things have been constantly rising but these researchers are still getting unrevised stipend.

Many researchers from across the country have come out on roads to lead the movement for increasing amount of allowance received under fellowship. However, this is not the first time that millions of Research Fellows have demanded for increase in their stipend.

Earlier in 2014, thousands of research fellows protested and forced the government to increase the amount of allowance. This might be the reason why government has not been able to bring up any policy to solve this problem.

Talking to Ground Report, president of Society of Young Scientist and PhD scholar Lal Chand Vishwakarma said that we met Dr. Harshvardhan, Union Minister of Science and Technology, on August 29, 2018 for addressing all our problems. During the meeting, Dr Harshvardhan agreed to increase the fund. He also told us to meet Professor Ashish Sharma, Secretary of the Department of Science and Technology.

On September 12, researchers met Professor Ashutosh and told them about their problem.The allowance available to all JRFs and SRFs across the country is low. This has to be increased by 15% every four years. However, it has been more than four years but the amount has not yet been revised.

The important thing is that after this meeting, frequent rounds of government office started. But no result came up. Meanwhile, researchers have no option but to keep going to ministry and UGC. They have visited MHRD Joint Secretary Manoj Kejriwal, Additional Secretary Sukhbir Singh Sandhu’s office at least 10 times but even that didn’t work out for them. They visited UGC Secretary Professor Rajneesh Jain’s office but again he showed them way to MHRD.

Stuck in a never ending process, researchers now have realized that protest is the only way left for them. Few days back, National Chemical Laboratory/NCL’s students also protested on road. NCL comes under IISER (Indian Institute of Science, Education and Research) and CSIR (Council of Scientific and Industrial Research.

A research fellow of IISER talked to Ground Report and said government has failed to bring any such policy according to which stipend of the researchers can be increased. Every time students have to protest for their rights. Last time the stipend was increased in 2006, 2010 and 2014. He also said that there is no fixed time for the distribution of stipend. Sometimes they don’t get it for months and sometimes they don’t get it throughout the year.

These are prominent demands of the researchers:
1. Fellowship amount of JRF, SRF and PhD students must be increased to 60%, as the amount is increased by 15% every year.
2. They should receive this amount in a fixed amount of time.
3. Government should make a guideline under pay commission that will ensure that researchers can get their fellowship amount on time.

55% increase in fellowship in 2014
Students qualified in NET and GATE received fellowship that was increased by 55%. UGC had increased 15 fellowship and scholarship amount by 55% for higher education which was implemented on 1 December, 2014.

What’s next?
There is currently more than one lakh research fellows in the country. Fellowship amount was supposed to be increased six months ago, but it has not been done so far. Lal Chandra Vishwakarma, president of Society of Young Scientist and PhD scholar says that fellowship increases only after the agitation. The government knows that students will protest. Lal Chand said that if our demands are not fulfilled by December, then there will be protest against the government in January.