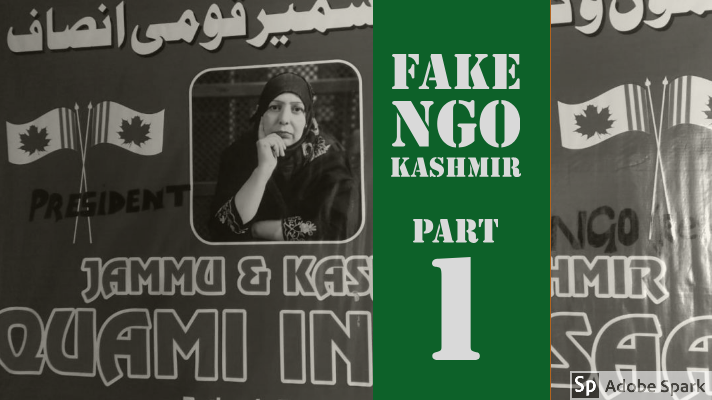 A NGO namely Jammu and Kashmir Qaumi Insaaf is allegedly involved in cheating People in Kashmir in the name of providing jobs, Sources told Groundreport.in.

Groundreport.in learnt that the NGO Jammu and Kashmir Qaumi Insaaf is without registration and have collected huge sums from many unemployed youth from different parts of Valley.

Sources said that the said NGO is fake besides fetching money in installment on pretext of providing jobs in different private and government sectors.

The NGO, sources said is seeking membership fee rupees 150 per person and rupees 100 as submission of form fee. Groundreport.in received reports of jobs committed by the very NGO in bank, which is fake.

When contacted General secretary of Jammu and Kashmir Qaumi Insaaf NGO claims that he is CR of HDFC bank. When Groundreport.in contacted HDFC bank, they said no such person in working with them.

As per the details available with News Agency Groundreport.in more than 2000 forms has been submitted by the unemployed people from different parts of Kashmir valley. The NGO had an office at Rajbagh in Srinagar city, which has been already changed two times in past two months.

They said they collect fee for Safai Karamchari also. Meanwhile When Groundreport.in contacted National Skill Development Corporation (NSDC) (Ministry of Finance as Public Private Partnership model) incharge they said that no such NGO is approved with NDSC.

They further added, “Action will be taken against Such NGO’s” adding that such schemes are free for people there is no form fee for Safai Karamchari.

Official from register of societies of Kashmir while speaking to Groundreport.in said that till date no such NGO in the name of Jammu and Kashmir Qaumi Insaaf is registered with them.

They said, “Jammu Kashmir Qaumi Insaaf is not registered and people should be aware about this. They added that without registration no NGO can start work.

This is not for the first time that an alleged fake NGO has looted people in Jammu and Kashmir but the fake companies and NGOs have previously looted millions of rupees from the people of the region.

How to figure out fake NGO in India?

Non-governmental organisations(NGO) are founded towards a particular cause. Mostly consisting of volunteer members, these groups campaign to raise awareness and collect funds towards their cause and for the betterment of the society. These organisations don’t work to make a profit and are independent of the state and the national governments.

They are usually charitable and receive tax exemption once they are registered. The people donating money to these organisations can also receive income tax rebate up to 50% of their taxable income.

However, there are some organisations forever looking to dupe people of their money by posing as NGOs. Because of fraud NGOs, people are losing confidence in the genuine NGOs.

The NGOs which receive grants from the government come under the purview of RTI act. If the NGO says that it receives funding from the government, ask the head for details of the funds they got and how they utilised them. Genuine NGOs publish their fund details and utilisation reports on their website.

The Council for Advancement of People’s Action and Rural Technology (CAPART) regularly releases names of blacklisted NGOs – check before you donate. Or approach an NGO through Charities Aid Foundation (CAF) India, which certifies the credibility of charitable institutions. Though the certification is not compulsory, genuine NGOs prefer to register themselves with CAF to obtain credibility.

You can verify the registration, their Tax Exemption Certificate and the cause they claim to support. Better still visit the organisation to get a fair idea about their operations.

You can ask for their annual reports, and a good NGO will be happy to provide them to you. Studying annual reports of the NGO will also help you understand the working and spending patterns of the organisation.

Genuine NGOs usually provide reports or updates on causes they work for so keep in touch with the NGO even after you have donated money – following up with them will ensure that the money you donated is being used for the right purpose.

If you cannot decide whom to give to or for what cause, you can approach organisations like ICICI Communities, GiveIndia, CAF or CRY. They work for multiple causes and will utilise your money wisely and efficiently.

There is also help at hand by called “Credibility Alliance, which is itself an NGO made to keep a check on other NGOs. The donor needs only to check if a particular NGO is in the list of Credibility Alliance’s website http://credibilityalliance.org/. There is another organisation also acting as a checkpoint called Give India. Give India’s website, has an alphabetical list of NGOs that are eligible to receive donations through them.

The method of payment also plays an important part in verifying whether the NGO is authentic or not. The best and the most cost-effective way is to pay directly to the NGO either by sending a cheque or online. Do not go by paying to agents of the NGO commonly known as direct selling agents (DSA), who get a commission on the collections. DSAs work on high commissions amounting to about 40-50%. So, the capital meant to be used for noble causes is getting halved by the DSAs.

After checking the credentials, there is the option to donate items. You can donate books, clothes, toys, etc. You can also choose to spend time rather than money.

Ask for their financial records

Genuine NGOs that have a website would have their financial records there. “But not all NGOs are online,” says Dr Swarna. “They should have their financial records for the asking though. You should be able to call them and ask for the details before donating, and if they are genuine, they should be able to provide them,” she says.

Visit the NGO, learn about them before giving

Another way to ensure that your money is going to a good cause is to visit the NGO and meet their staff before giving. Malathi Siva of Indian Council for Child Welfare says, “Most NGOs are registered and should be able to provide you with Income Tax exemption certificates on donation. It’s always good to go visit them before you make a donation. That way, you can see the work they do first hand before making a commitment.”

Be suspicious of tall claims

Another way to sift out the genuine NGOs from the scamsters is to actually go through the claims they make about their work. “There should be some honesty in the asking. Tall claims – like we have managed to eradicate misogyny from an institution in two years – should be looked at with suspicion,” says Dr Swarna.

Most importantly, be smart and never share your bank account details over phone. Whether it’s a marketing call, a person who claims to be from a bank, a possible job opportunity, or an NGO asking for funds – it is never okay to share details like your customer ID, password, cvv number, answers to secret questions, or any other such details with a person on phone.