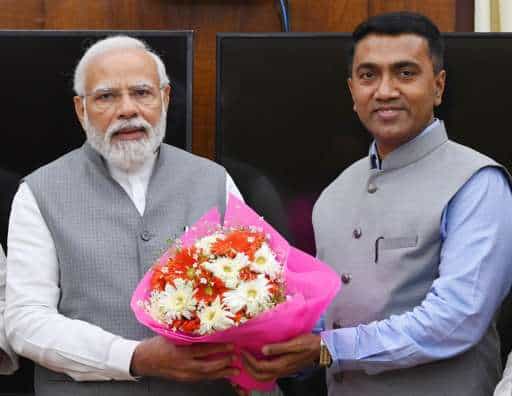 Ground Report | New Delhi: Pramod Sawant will be the Chief Minister of Goa. He was elected leader in the BJP Legislature Party meeting in Goa. Like Uttarakhand, for the last 10 days, there was suspense regarding the name of the Chief Minister. But now he has been elected the leader of the legislature party.

BJP central observer Narendra Singh Tomar told that Vishwajit Rane proposed Pramod Sawant’s name and everyone supported it. He said- Sawant has been unanimously elected as the leader of the Legislature Party. He will be the leader of the legislature party for the next five years.

Pramod Sawant is widely regarded as an unassuming MLA from the Sanquelim constituency in North Goa. He was elected twice in the region with no prior political experience to his credit.

A staunch supporter of the late Goa Chief Minister Manohar Parrikar, Sawant was elected as Speaker of the Assembly by Parrikar, despite the fact that he had never held a state cabinet post.

A physician by profession and a member of RSS, Sawant graduated from Ganga College of Ayurvedic Medicine in the Kolhapur district of Maharashtra and has a Masters in Social Welfare from Tilak Maharashtra Vidyapeeth.

He was chairman of the Goa State Infrastructure Development Corporation, an initiative created by Parrikar. He was sworn in as Chief Minister of Goa on March 18, 2019, following the passing of Manohar Parrikar.

BJP has won 20 out of 40 seats in the Goa Assembly elections. But it also has the support of three independent MLAs and two MLAs of MGP (Maharashtrawadi Gomantak Party). Congress won 11 seats.