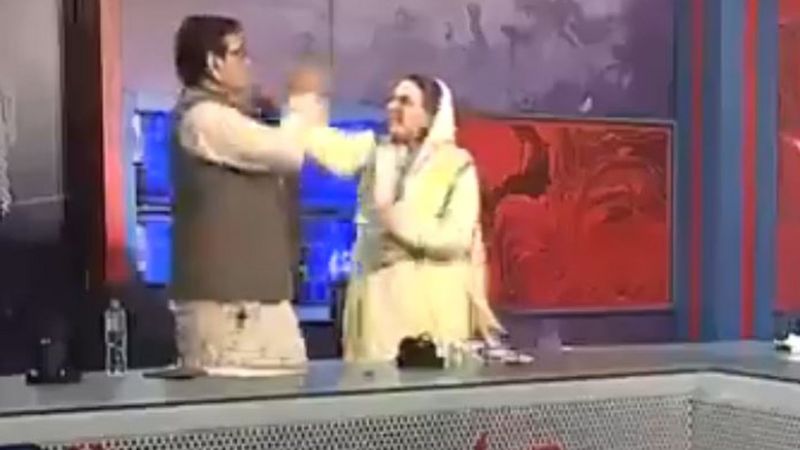 She has posted a video in which she is saying that Mandokhel was continuously abusing her.

Ground Report | New Delhi: Slaps MP during TV show; A case of scuffle has come to the fore during a TV news debate in Pakistan. In the video going viral on social media, a scuffle can be seen between Pakistan Tehreek-e-Insaf (PTI) party leader Firdous Ashiq Awan and PPP party leader Abdul Qadir Khan Mandokhel.

Actually, this incident happened during a program of Pakistani news channel Express News. In anchor Javed Chaudhary’s program called ‘Kal Tak’, both the leaders were called for a discussion on corruption during which a very heated debate started between the two.

PPP leader Mandokhel, who is also an MP, started directly accusing Firdous Awan of corruption. On this, Awan asked her for proof of corruption and said that she would file a defamation case. The debate went on increasing and after this Firdaus caught hold of him and slapped him, after which a scuffle started between the two leaders.

Who are Firdous Awan and Mandokhel

At the same time, Qadir Khan Mandokhel is a member of the National Assembly from the Pakistan Peoples Party, led by Bilawal Bhutto. He had recently won the Karachi West-2 seat in the by-elections held in April.

PTI leader Awan has issued a clarification on this incident by tweeting. She has posted a video in which she is saying that Mandokhel was continuously abusing her.

She said that during the break in the program, the MP abused and threatened her and her father. Awan told that she raised her hand on Mandokhel in self-defense because her honor was at stake.

She says that this short video has been leaked while the full video of this program should be presented so that the truth can be known why he was forced to raise his hand. Along with this, she has said that she is talking to her legal advisors and she is considering filing a case of defamation against Mandokhel, not only women’s exploitation.