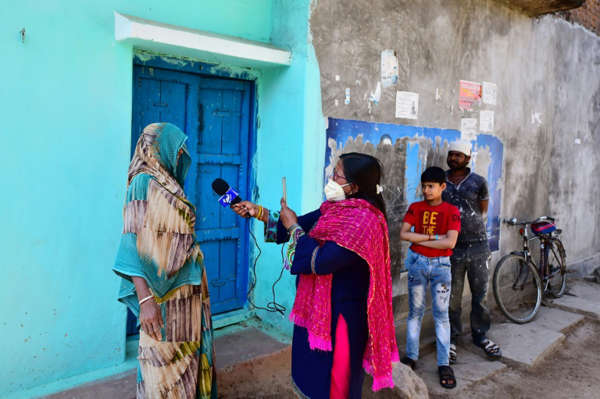 Ground Report | New Delhi: Rural women journalists; A team of low-caste, smartphone-wielding women reporters chronicling the heartland of India could give the film-mad country its first Oscar-winning film after its own story became a critically acclaimed documentary.

‘Women Who Give Hope’ – Their efforts are the subject of “Writing with Fire,” an Oscar-nominated documentary that has conquered the film festival circuit and already won the Special Jury Prize at Sundance.

Khabar Lahriya’s online portal is run by women belonging to minorities in Uttar Pradesh, especially the Dalit and Muslim communities. “It’s a very inspiring story,” Rintu Thomas, the documentary’s director, told AFP. It’s a story of hope for women. ” Rintu Thomas was in Los Angeles, USA, where her documentary was shown in theatres and was later nominated for an Oscar.

The story of the documentary based on the news portal Khabar Lahriya of the state of Uttar Pradesh is about women journalists who have struggled to counter the prevailing views in their society and disprove them.

Speaking to AFP, Khabar Lahariya’s managing editor Meera Devi said, “None of our news is accepted unless it contains women’s views or interviews.”

India is home to the world’s most prolific film industry and cinema occupies a privileged place in the national culture, with stars enjoying the near-godlike status and people often lining up to see the same film multiple times.

But no movie or documentary produced in India has ever won an Academy Award, even though locally shot foreign productions Gandhi and Slumdog Millionaire each won Best Picture in previous years.

Perhaps this is the journalistic principle that has made Khabar Lahriya a big name in the state of Uttar Pradesh and the citizens tell their problems to the female reporters involved in it so that they can get proper publication and access to the concerned authorities.

Talking about the struggle to bring Khabar Lahria to this place, Meera Devi said, “People think that women are cowards. Women are ignorant. We started the news wave to eradicate all such thoughts and accept the challenge for ourselves.

Regarding the women correspondents associated with Khabar Lahriya, Meera Devi said, “There are only women in Khabar Lahriya who are from rural societies. Not properly educated. Are from minorities. They are from Dalit or Muslim communities. Who come from the village. We have taken such women and trained them. (Rural women journalists)