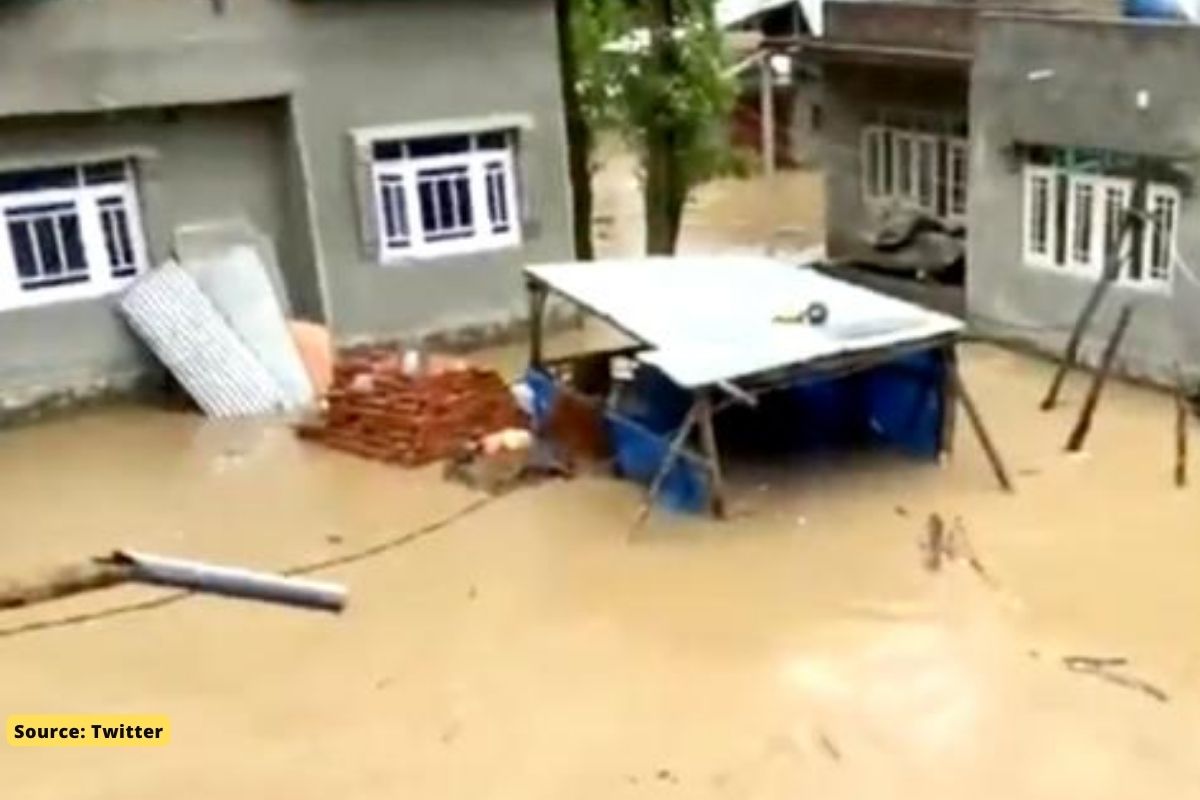 Heavy rain hit parts of Jammu and Kashmir causing flash floods and landslides in several districts of the Union Territory. The flood and irrigation department sounded the flood alert on the Jhelum river when the water level crossed the 21-foot mark at Sangam in the Anantnag district, which is a flood warning mark.

Low-lying areas in Srinagar city and other parts of the valley face flooding as higher reaches are threatened by flash floods and landslides. However, the Department of Meteorology (MeT) has forecast an improvement in weather from the afternoon.

Many parts of northern Kashmir, including Bandipora, experienced snowfall and authorities deployed machinery and equipment to clear snow from roads. The route to the Amarnath Shrine also had snowfall on the Baltal side. The Bemina town of Srinagar was witnessing a flash flood.

A breach in a temporary diversion along the banks of the Vaishov stream was also reported. Doodhganga River also flowed near the flood warning level in Barzulla, in the heart of the city’s civil lines area.

Authorities sounded a flood alarm in Srinagar after the water level in Jhelum surpassed the 16-foot mark at Ram Munshibagh here. Citing an official from the Kashmir Flood Control and Irrigation Department, the GNS news agency reported that the Jhelum River was flowing at 16.21ft in Ram Munshibagh, 0.21ft above the alarm level of 16ft and 1 .69 feet below the 18-foot flood stage.

Regarding some tributaries, the official said, the water level in Vishow Nallah at Khudwani receded from 10.7m at noon to 9.71m at 2 p.m which is still above the danger mark of 7.0m there. Nallah Lidder near Batkoot was flowing at 1.19m against 1.21m at noon, Doodhganga Nallah at Barzulla was flowing at 2.78m against dangerous mark of 3.8m, Sindh Nallah at Doderhama was flowing 3.27m against 3.36m at noon which was above mark of 3.5m when alarm is sounded there and 3.65m (when flood is declared).

In Budgam: At least 52 sheep, eight horses and five cows have died due to cloudburst and inclement weather in the upper forest areas in Central Kashmir’s Budgam district, authorities said.

Budgam district sheep officer Dr Asrhraf told Kashmir Dot Com news agency that based on initial details in Dishkhall, Durian, Lathermand, Ayud, Koreg and other upper reaches of Budgam district, at least 52 sheep have died in the last two days due to the downpour and inclement weather.

Also Read:  From Jammu Kashmir to Everest and Ladakh, the risk of floods increases

The death toll may rise over time as the areas have no mobile accessibility, as these nomadic families graze the animals, he said, adding that a massive rescue operation is underway in the areas.

In Udhampur, a 150-foot stretch of the Jammu-Srinagar highway was washed away on Wednesday near Toldi Nallah, 16 kilometres from the city of Udhampur, they said. Many machines were involved in the work to restore the patch of road washed away by flash floods on the Tawi River.

Reports say that more than 30 landslides and mudslides on the Ramban-Udhampur highway section have blocked the highway. Several inland roads in the Jammu division and the Kashmir valley were also closed to traffic.

“The possibilities of opening roads today are minimal. There are no reports of loss of life,” they said. “The Jammu-Srinagar highway is blocked due to further stone fire and landslides in several places in Ramban district,” a traffic officer said.

In Ramban, a house collapsed but luckily there was no loss of life in the incident. However, five people were trapped in flash floods in the Ans river in Reasi district but were rescued by police.

Amid heavy rains, Ramban and Kishtwar district authorities also closed all educational institutions up to the upper secondary level, including private schools during the day. “All schools in Ramban district including senior secondary schools will remain closed today in view of heavy rain and overflowing nallahs and landslides in several places,” Deputy Commissioner Ramban Mussarat Islam tweeted.

Other places in the Union Territory where rainfall was reported to include Qazigund (75mm), Srinagar airport (62.4mm), Jammu city (45mm), and Bhaderwah (42mm).

A high alert has been issued for several areas in the mountainous districts of Doda, Kishtwar, Ramban and also in Jammu, Udhampur, Reasi and Pulwama, where the water level in the rivers was rising rapidly.

“Tuesday’s high temperature is 14.2 degrees below normal. A temperature of 15 degrees Celsius is very common in February in Srinagar,” a Met department official said. The higher reaches in Jammu and Kashmir and Ladakh have received fresh snowfall for the past three days. The cold wind blowing into the valley from the snow-capped mountains has lowered the temperature inside.