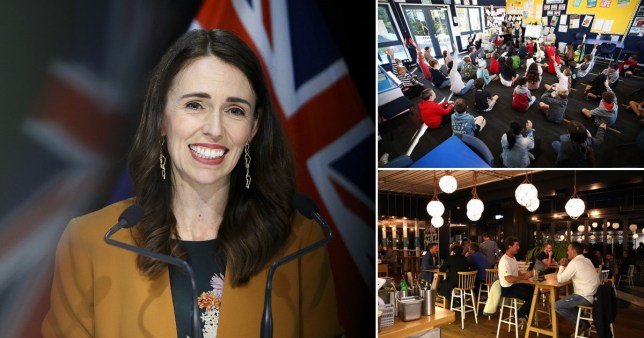 Bloomfield called the milestone “a significant mark in our journey” but said “ongoing vigilance against COVID-19 will continue to be essential.” The country of a little less than five million put in-place a strict lockdown on March 25th, and ever since the authorities were on their toes to ‘flatten the curve’ of viral spread.

I know it’s a Monday and all, but I reckon I might pop that bottle of bubbly tonight and raise a glass to all the people of this fine country. Ka Pai Aotearoa,” James Shaw, the climate change minister was quoted as saying by Guardian, using a Māori phrase that means ‘good job, New Zealand.’added Ardern.

New Zealand had reported just over 200 confirmed cases when the government declared the lockdown in the country. As of today, all confirmed 1,504 COVID patients have recovered with a total fatality count of 22. The South Pacific nation has not recorded any coronavirus infection for the last 17 days, pushing the authorities for more liberal opening up of the economy.

Based on the news from the health ministry, Ardern told reporters on Monday that she was easing the four-tiered lockdown system first imposed in March to its lowest tier, Level 1, removing limits on public gatherings and mandatory social distancing, while keeping New Zealand’s borders closed to international travel. Ardern initially imposed the nationwide lockdown when the coronavirus outbreak first reached New Zealand’s shores, shutting down all economic activity except for essential services.

She has gradually eased restrictions beginning in May, lifting bans on construction work and domestic travel, eventually allowing shopping malls, movie theaters, restaurants and schools to reopen. Shortly after the final restrictions were lifted, New Zealand Rugby announced it will allow fans into stadiums in unrestricted numbers later this week for the opening games of the new season.

A brief about this amazing woman leader

Jacinda Kate Laurell Ardern born on 26 July 1980 is a New Zealand’s politician who is serving as the 40th prime minister of New Zealand and Leader of the Labour Party since 2017. She has been the Member of Parliament (MP) for Mount Albert since March 2017, having first been elected to the House of Representatives as a list MP in 2008. Ardern was raised by her mother and father, a police officer, in Murupara and Morrinsville on New Zealand’s North Island. She was raised Mormon and described herself as an “acceptable nerd” in high school.

“It was how my friends identified me. I was both Mormon and the sober driver — that was the benefit they saw from my [church] membership,” she told Time in 2017. In 2005, Arden left the Church of Jesus Christ of Latter-day Saints over its stance on LGBTQ people and now identifies as agnostic, People reported.Ardern was sworn into office in October 2017 and has been applauded for being an outspoken voice against sexism and racism during her time in office.

Ardern joined New Zealand Parliament in 2008. Jacinda Ardern speaks to MPs in Parliament in Wellington, New Zealand, in October 2017. Associated Press. At 28 years old, Ardern was elected into New Zealand’s Parliament as part of the center-left Labour Party. At the time, she was the parliament’s youngest sitting member. Nine years later, in July 2017, Ardern was serving as deputy to the Labour Party’s leader, Andrew Little, when he stepped down and named her as his successor.

Suddenly the party’s polling numbers started to climb in what the country called “Jacindamania.” When Ardern assumed office in October 2017, she became New Zealand’s youngest leader in 150 years. Her platform focused on education reform, poverty, and mental healthcare, and she campaigned with “relentless positivity.” Ardern was a welcoming presence who occasionally spoke with reporters directly in the beginning stages of her leadership, instead of going through a spokesperson.

Ardern gave birth to her daughter, Neve Te Aroha Ardern Gayford, in June 2018. It is her first child with her longtime partner, the TV host Clarke Gayford. At the time, only one other world leader, former Pakistani PM Benazir Bhutto, had given birth while in office. Ardern celebrated her daughter’s birth on Instagram, thanking the “wonderful team at Auckland City Hospital” for its help.

After six weeks of maternity leave, Ardern returned to work, with Gayford staying home to care for their daughter.
When her daughter was 3 months old, Ardern brought her to the United Nations General Assembly in hopes of creating “a path for other women.”

“I want to normalize it,” she told CNN’s Christiane Amanpour of the event. “If we want to make workplaces more open, we need to acknowledge logistical challenges … by being more open it might create a path for other women.”

Since the Christchurch mosque shootings in March 2019, Ardern has called for a global campaign against racism. The man who claimed responsibility for the shooting was an Australian national who had promoted white nationalism and anti-Muslim sentiments. Ardern told BBC of the shooting: “What New Zealand experienced here was violence brought against us by someone who grew up and learned their ideology somewhere else. If we want to make sure globally that we are a safe and tolerant and inclusive world we cannot think about this in terms of boundaries.”

In April 2019, New Zealand passed a gun reform law that banned most semi-automatic firearms, parts that convert firearms into semi-automatic. All such efforts makes jacinda ardern, a true leader with all leadership qualities to be called as the best PM of current times. Other than New Zealand, countries such as Norway, Finland and Namibia to have recorded near virus-free stimulus as far as the spread of coronavirus pandemic is concerned.