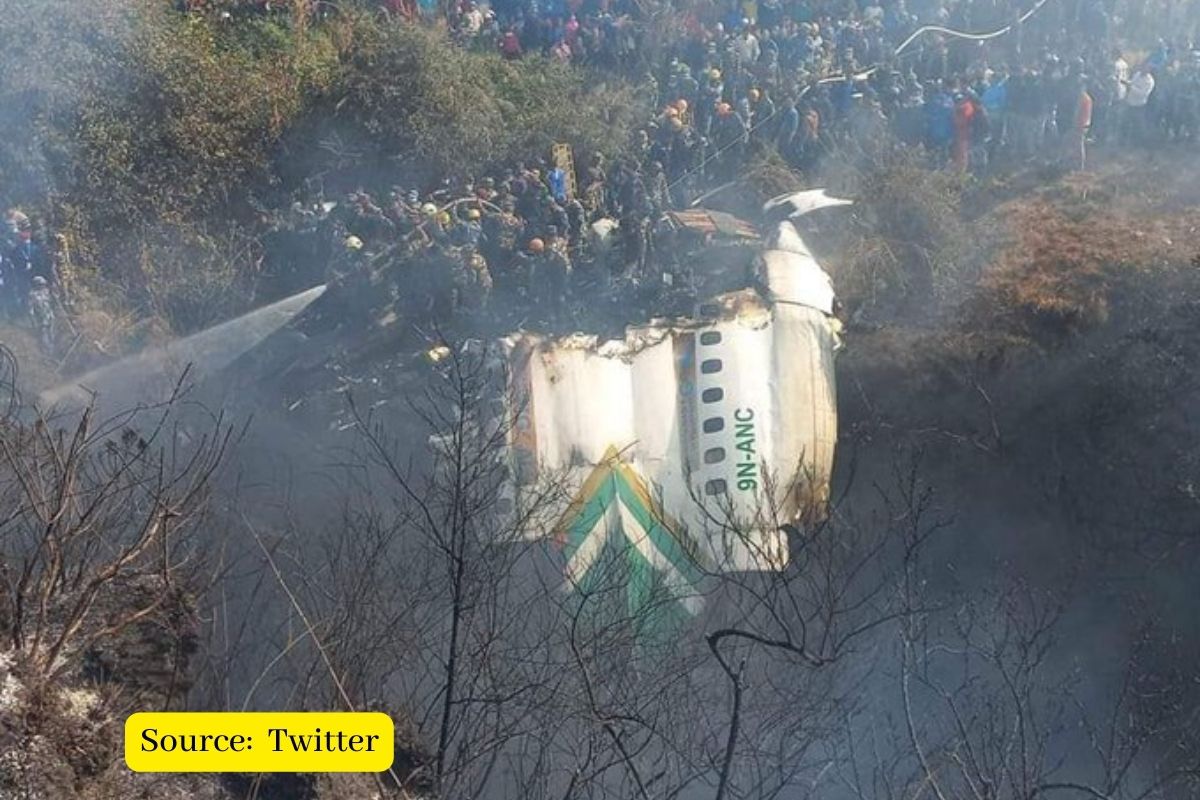 A plane of the Nepalese airline Yeti Airline with more than 72 people on board suffered an accident this Sunday when it was covering a domestic route that departed from Kathmandu, without knowing details about the situation of the passengers. At least four Indians were among the passengers aboard the Yeti Airlines flight that crashed in Pokhara.

At least 30 people were killed when a passenger plane crashed in the Pokhara region of Nepal’s Kaski district. District Director Tek Bahadur K.C. confirmed that so far the bodies of 30 passengers have been recovered.

According to the Civil Aviation Authority of Nepal (CAAN), Yeti Airlines plane 9N-ANC ATR-72 took off from Kathmandu Tribhuvan International Airport at 10:33 a.m. Pokhara is a major tourist destination in the Himalayan nation.

While landing at Pokhara Airport, the aircraft crashed on the bank of the Seti River between the old airport and the new airport, according to local reports.

The Yeti Airlines plane crashed in the Pokhara district, some 200 kilometres west of the Nepalese capital, when it was trying to land, company spokesman Sudarshan Bartaula told the Kathmandu Post.

The Nepal plane crash had 72 people on board, including 53 Nepalese citizens, 5 Indians, 4 Russians, one Irishman, 2 Koreans, 1 Argentine and one French national, according to information released by the airport authority. Here are the details.

The aircraft, an ATR-72, had 68 passengers and four crew members on board. Videos posted on social networks, attributed to today’s accident, show columns of smoke coming from the area where the accident took place.

Pokhara airport serves as a connection for travellers heading to the town of Jomsom, located in the heart of the Himalayas, a popular destination among foreign tourists visiting the Annapurna peak (8,091 meters) or the Mustang region, as well as pilgrims Hindus.

Nepal, with frequent air accidents, has been the target of repeated international sanctions for its lack of controls. Prime Minister Pushpa Kamal Dahal called an emergency meeting after the accident.

List of Indians who were travelling in the flight

Residents of UP’s Ghazipur were sharing their videos live on a social media app when the plane met with the accident. Five friends–Sonu Jaiswal, Anil, Vishal, Abhisek and Sanjay Jaiswal– were there on the plane. Sonu was showing it live on his FB account when the plane crashed.

Why so many plane crashes happening in Nepal?

The country’s domestic airlines tend to use old and dilapidated aircraft; the twin otter involved in the latest tragedy was in his 40s. There is inadequate training and application of accepted international aviation standards.

In a country with very challenging terrain and unpredictable weather, there is little hope that this litany of tragedies will end any time soon. The International Civil Aviation Organization seeks to reduce the rate of fatal accidents in Nepal. It says: “The beautiful but rugged terrain of the country makes the safety of air operations more challenging than in other areas of the world.”

Air operators say Nepal lacks the infrastructure to make accurate weather forecasts, especially in remote areas with difficult mountainous terrain, where fatal accidents have occurred in the past.

The European Union has banned Nepali airlines from accessing its territory since 2013. In May 2022, 22 people travelling on board a plane from the Nepalese company Tara Air died when it crashed.

Air traffic control lost contact with the twin-prop Twin Otter shortly after it took off from Pokhara and headed for Jomsom, a popular trekking destination.