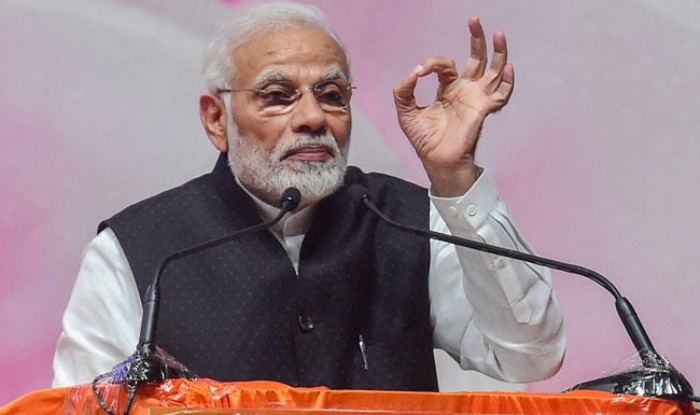 Prime Minister Narendra Modi Monday hit out at National Conference vice president Omar Abdullah over his statement seeking a separate Prime Minister for J&K. Addressing an election rally in Telangana, PM Modi said, “Two Prime Ministers for Hindustan? Do you agree with it? Congress has to answer and all the ‘Mahagathbandhan’ partners have to answer. What are the reasons and how dare he say that”, he said.

Modi said that he also wants to ask the leaders of the grand alliance whether they agree with Omar Abdullah’s statement.

Union Minister Arun Jaitley in the past had called Article 35A a ‘historic blunder’ committed by Jawaharlal Nehru in retaliation to which Omar Abdullah during his address to National Conference workers in a dramatic escalation has called for the state’s own Prime Minister and President. He said, “Modi said in an interview that by 2020, we will repeal article 35A. Finance Minister Arun Jaitley had threatened us that Article 35a and Article 370 will be removed, but Jammu and Kashmir is not like the other states. Other states became a part of India without any conditions. We made conditions. We did not come for free.”

“To maintain our distinct identity, we entered certain things in the Constitution. We said our identity would be ours, we will have our own law, our own flag. At that time we also had our President and Prime Minister, and we will bring that back,” he added.

Abdullah further added that the provision that was passed back in 1949 to ensure special status and internal autonomy to Jammu and Kashmir is being withdrawn now, and in that case if the ‘breaking the condition’ is being spoken about, then they need to speak of ‘governance’ too. He said, “What is our fault if we asked for something? We also extended the hand of friendship. Now after 70 years you say that the decision we made back then was wrong and now you’re asking to break the condition. There is no doubt that if you speak of breaking the conditions, you have to speak of governance too.”

Meanwhile Prime Monster said “I want to ask Bengal Didi who shouts a lot, do you agree with it? answer the people. U-turn (Chandrababu) Babu with whom Farooq Abdullah campaigned recently in Andhra Pradesh. Do you think Naidu should get votes?

Finance Minister wrote on Facebook “Ek Desh Mein Do Vidhan, Do Pradhan” The two mainstream parties in the Kashmir are increasingly losing their identity. The separatists and the terrorists want a part of the State to segregate from India. India will never accept this. It has already given a loud and clear message both to the separatists/ terrorists and Pakistan that Azadi is not a distant possibility. It is an impossibility.

Statements of the two parties that the constitutional link between the State and the country is based on the solemn assurance of Article 35A. If there is no Article 35A, it will break the link. Some have even gone further and argued that two constitutional provisions constitute the revocable link which has to be maintained.

The argument is completely unacceptable. Article 35A was not there in 1947 when the Instrument of Accession was signed in the month of October. In 1950, when the Constitution came into force, it was not there. It was only surreptitiously inserted in 1954. How can it be the essential Constitutional link? The challenge is being heard by the Supreme Court. Why intimidate the Court which is hearing the matter. History is never reversed by Court judgements. The argument of revocability is as absurd as a suggestion that if the Indian Independence Act was revoked by the British Parliament, we will lose our Independence.

The National Conference President’s statement today that we will demand the revival of the post of Wazir-e-Azam and Sadar-e-Riyasat is only intended to create a separatists psyche. Little do they realise how much they are hurting the country as also their own people. The new India will never allow any Government to commit such blunders.