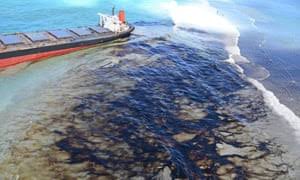 Ground Report | News Desk | On Friday, the Mauritius government declared a state of ‘environmental emergency.’ A large amount of oil leaked into the sea from a stranded Japanese-owned bulk carrier off the country’s coast.

On 25th July, the Japanese owned ship ‘MV Wakashio’ ran aground on a coral reef of the Indian Ocean. The crew of the ship was evacuated. But the vast bulk carrier has since begun leaking tons of fuel into the surrounding waters and is spread far and wide.

Due to the leak, thousands of animal species are also in danger of drowning in a polluted sea. Moreover, Mauritius is home to a world-renowned coral reef, and tourism is a crucial part of the nation’s economy as it’s a small island nation. A big part of the nation depends on its tourism economy.

France comes in support to help

Appealing to France to help, Prime Minister Pravind Jugnauth said, “The nation did not have the skills and expertise to refloat stranded ships.”In response, France has shown its support to Mauritius while Japan has also come to assist France’s efforts.

French President Emmanuel Macron tweeted on Saturday that, “When biodiversity is in peril, there us urgency to act. France is there alongside the people of Mauritius. You can count on our support dear Jugnauth.”

France has sent a military aircraft with pollution control equipment from its nearby island of Réunion. The local police units and the Mauritius coast guard are also at the site.

The ship’s owner Nagashiki Shipping said while coming in front that,

“due to the bad weather and constant pounding over the past few days, the starboard side bunker tank of the vessel has been breached and an amount of fuel oil has escaped into the sea.”

Prime Minister Pravind Jugnauth said late on Monday that a Japanese ship that ran aground on a reef off Mauritius two weeks ago has stopped leaking oil into the Indian Ocean, but the island nation must still prepare for “a worst-case scenario.”

Moreover, he added, the leak from a damaged oil tank on board the stricken vessel, the MV Wakashio, had stopped but that the ship still had 2,000 tonnes of oil in two other, undamaged tanks.

The ship is currently lying at Pointe d’Esny, a known sanctuary for rare wildlife in an area of wetlands near a marine park.

Written by Shrey Srivastava, a Journalism graduate from the Indian Institute of Mass Communication, New Delhi. He writes for Politics, Education, and International affairs.