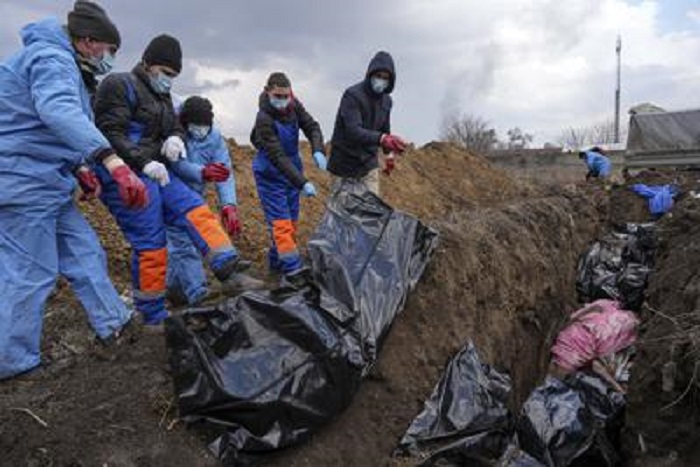 Ground Report | New Delhi: Mariupol Mass graves; The bodies of Ukrainian civilians and soldiers killed during the Russian shelling of Mariupol are being buried in a mass grave. With the southern Ukrainian city under constant attack, officials were waiting for an opportunity to allow individual burials to resume.

The city of Mariupol , in the southeast of Ukraine with some 500,000 inhabitants, is one of the cities that has suffered the most from attacks and siege by Russian troops since the invasion of the country began on February 24.

The aerial bombardments started this morning by the Russian Army have spread in recent hours to the center of the city, where they have already caused several deaths. This new attack comes after the one that yesterday affected a children’s hospital that killed three people, two of them minors, and left 17 injured.

According to the deputy mayor of Mariupol, Pyotr Andryushchenko, a total of 1,300 civilians have been killed since the beginning of the Russian invasion two weeks ago . In addition, the humanitarian corridor agreed between Ukraine and Russia to evacuate the city’s population is totally blocked, while the one opened around Kiev maintains a better situation, although its evolution is also uncertain.

This has led the inhabitants of the Ukrainian city to dig mass graves to bury their relatives . The terrible images show the citizens depositing in the great grave the hundreds of deaths that have occurred in recent days as a result of the attacks by Vladimir Putin’s troops in their siege of the city.

A 6-year-old girl named Tanya, who died of dehydration Tuesday after her mother was killed, is among them, The New York Times reports. Ukraine’s President Volodymyr Zelenskyy said it was “the first time in decades, apparently since the Hitler’s invasion” that a child died of dehydration in Mariupol.

The council said it was hit by “several bombs” and the damage was “colossal”. It is one of eight major airstrikes in Mariupol in the last 48 hours, according to AP.