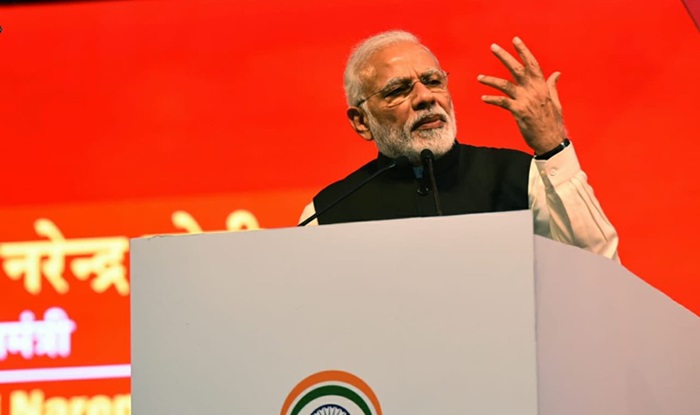 Prime Minister Narendra Modi will again be contesting from Varanasi in the 2019 parliamentary polls. Party chief Amit Shah will however replace veteran and member of the margdarshak committee L K Advani in Gandhinagar. This will be Shah’s debut in the general election. 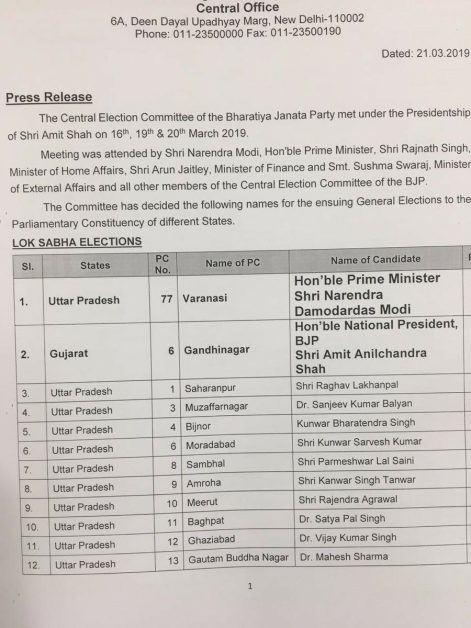 Nadda also said that the party has finalised names of all 17 candidates from Bihar which will be announced in the state jointly with allies. 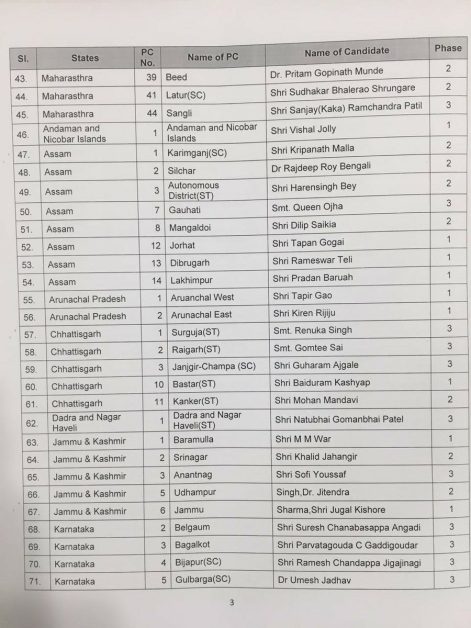 Union Minister VK Singh will be repeated from Ghaziabad and Mahesh Sharma from Gautam Budh Nagar.

Smriti Irani will again contest from Amethi against Congress president Rahul Gandhi. Actor-turned-politician Hema Malini is being repeated from Mathura.

Sakshi Maharaj will contest from Unnao, Sanjeev Balyan from Muzaffarnagar.

From Srinagar, Khalid Jahangir will contest while Jugal Kishore Sharma has been given ticket from Jammu and Dr Jitendra Singh from Uddhampur.

In Mumbai North, the BJP has reposed faith in the incumbent MP Poonam Mahajan; from Ernakulam – Union Minister K Alphons has been nominated. In Thiruvananthapuram, K Rajasekharan will be taking against Congress’ Shashi Tharoor.

From Ajmer, the party has fielded Bhagirath Choudhary, whereas, the candidate in Kota is Om Birla. Union Minister Arjun Ram Meghwal will contest from Bikaner.

Union Minister Pon Radhakrishnan has been issued the ticket from Kanyakumari, Sadananda Gowda from Bengaluru North, Pratima Bhome from Tripura East and Debashree Chowdhury from Raiganj.

“We have named 184 candidates which were finalised in the CEC meeting attended by our Prime Minister, BJP president, (Home Minister) Rajnath Singh ji and (External Affairs Minister) Sushma Swaraj,” Nadda said. The list, however, does not include BJP veteran Lal Krishna Advani, who is currently the lawmaker from Gandhinagar.