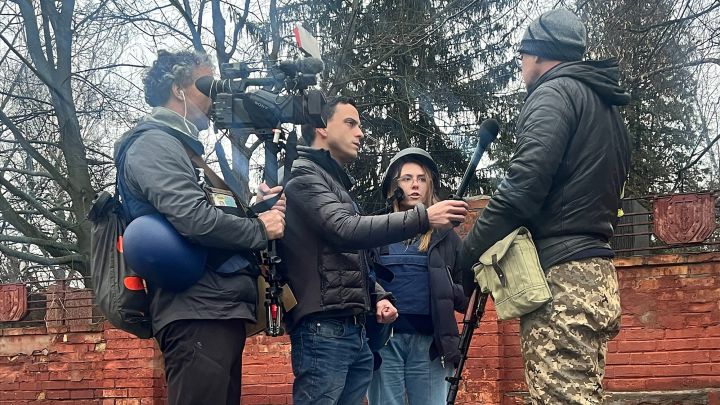 Journalists killed in Ukraine war; Ground Report | New Delhi: Ukraine’s Defense Ministry has blamed Russian military forces for killing Fox News journalist Oleksandra Karshainova and cameraman Pierre Zakrzewski. He said the two journalists were killed in a Russian military shelling when their vehicle crashed into the Hornika area on the outskirts of the Ukrainian capital, Kyiv.

Fox News, in its news bulletin reporting on the deaths of Krishnayova and Zakaryovsky, said that Zakryovsky was a “legend” in the channel. “His death is extremely painful. He has been working with us for years. He has reported on the wars in Iraq, Afghanistan and Syria. He was accustomed to working under pressure. “

At least five journalists have been killed in the war since the Russian-led invasion of Ukraine, along with the deaths of Krasnoyarsk and Zakaryovsky. American filmmaker Brent Reynolds was seriously injured and later died during the filming of the war on Saturday.

On Tuesday, just before the news of the deaths of Krishnayova and Zakaryovsky was announced, the head of human rights in the Ukrainian parliament, Ludmila Denisova, said that dozens of journalists had been injured and at least three killed in the fighting so far.

“At least 35 journalists have been attacked by Russian forces, three of whom have been killed,” Denisova said.

According to a Ukrainian police official, American filmmaker Reynolds was shot dead by Russian forces on March 13 in the town of Arpan, near Kyiv.

According to Fox News, Zakaryovsky was 55 years old and Krasnoyarsk was 24 years old. He was reporting from Horinka, a suburb of Kyiv, with Benjamin Hall, another Fox correspondent. Benjamin Hall was also injured in the incident and is being treated in hospital. Ukraine’s Defense Ministry said in a statement that part of Benjamin Hall’s leg had to be amputated.

Appeal for protection of journalists

Russia launched a military strike on Ukraine on February 24 after a month-long standoff. As a result of this war, the United States and its allies imposed sanctions on Russia. According to the United Nations, the war has forced some 3 million Ukrainians to flee the country, as Russian forces have laid siege to and bombed several cities and towns.

Meanwhile, several journalists and journalists’ organizations have expressed their condolences over the deaths of journalists in Ukraine. Several members of the US Congress praised Zakariyevsky as an American journalist. The Prime Minister of Ireland Michael Martin stated that he was an Irish citizen.

Martin wrote on Twitter: “We are saddened and disappointed by the deaths of Irish citizen and journalist Pierre Zacharyowski and one of his associates. I am with his family, friends and fellow journalists in this hour of need. We condemn Russia’s unjust and unjust war on Ukraine.”