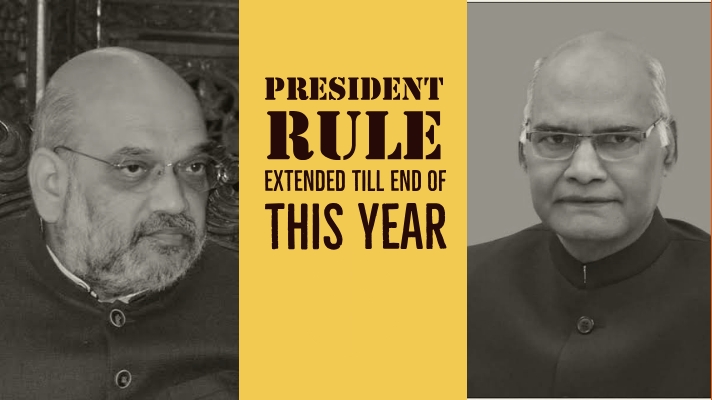 Union Home Minister Amit Shah has said that the Centre has started preparations and assembly elections in Jammu and Kashmir may be held by the end of this year.

Amit Shah also proposed that the President’s Rule should be extended in Jammu and Kashmir for another six months.

He also said that the Centre has successfully rooted out Militancy from Kashmir, thus paving way for assembly elections.

“In the view of Ramzan and Amarnath Yatra in Jammu and Kashmir, preparations are underway to hold Assembly elections by the end of this year,” Shah informed the House. Shah, who was on a two-day visit to Jammu and Kashmir, spoke of the security situation in the state.

“We are monitoring the situation in Jammu and Kashmir. Construction of bunkers in border areas will be done within the time limit set by the previous home minister Rajnath Singh Ji. Life of every individual is important to us,” he said. The Home Minister remarked that terror-related incidents saw a decline during President’s rule while stressing that the government will continue to maintain a zero-tolerance policy against the menace in the state.

Talking about the successful conduct of Panchayat elections, Shah said, “Panchayat elections were not conducted in Jammu and Kashmir for many years. But in the last year, our government held elections in more than 4,000 panchayats. Now, over 40,000 panches and sarpanch are serving for the people.” “Elections in the state have been bloody in the past, but there was no violence during Lok Sabha elections. Law and order situation has improved considerably,” he added.

“This House approves the continuance in force of the Proclamation dated the 19th December 2018 in respect of the State of Jammu and Kashmir, issued under article 356 of the Constitution by the President, for a further period of six months with effect from July 3, 2019,” the resolution said. The Union Cabinet had earlier this month approved an extension of President’s Rule.

Shah also moved a bill to amend the Jammu and Kashmir Reservation Act, 2004, for consideration and passage in the House. “The Amendment proposes that people living along Line of Control, International Border and Line of Actual Control should be included in the 3 per cent reservation,” The Home Minister said.

“Due to continuous cross-border tensions, persons living along the International Border suffer from socio-economic and educational backwardness. This situation often compels departure of these residents to other safer places thereby having an adverse impact on their economic condition and educational status,” the statement of objects and reasons appended to the bill said. “Therefore, there was a persistent demand from persons residing in the areas adjoining the International Border to bring them within the ambit of the said Act and bring them at par with the persons living in areas adjoining the Actual Line of Control,” it said.

Elections in Jammu and Kashmir have been pending for several months after the PDP-BJP coalition government fell through in June last year.

BJP pulled out of the coalition that was led by PDP chief Mehbooba Mufti and Governor’s Rule was immediately imposed in the state.

The Jammu and Kashmir Assembly was dissolved in November.

The home minister also moved the J&K Reservation Bill in Lok Sabha. Shah said, “This bill is not to please anyone but for those living near the International Border.”