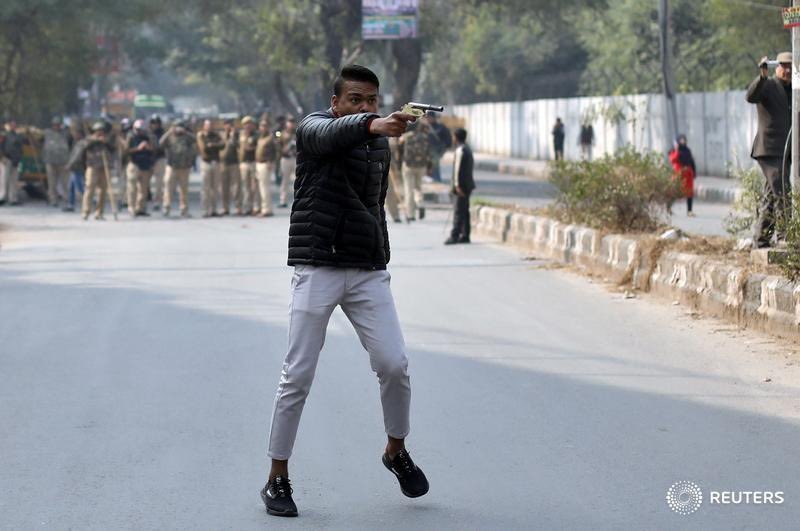 A man wielding a gun opened fire on a group of protestors against the controversial Citizenship Amendment Act (CAA) near Jamia Milia Islamia University. The incident comes days after Minister of State Finance Anurag Thakur encouraged the crowd to chant “Goli maro saalon ko” during an election rally in Delhi.

The man who was grabbed moments later by the Delhi Police has been identified as Gopal who termed himself a “Ram Bhakt.” The man brandishing the gun can be heard saying, “Yeh lo azaadi…Hindustan zindabad…Delhi Police zindabad,” as Delhi Police personnel watched.

Shadab Farooq, a mass communication student, was injured in his left hand and taken to the AIIMS Trauma Centre. There was heavy police and media presence when the incident took place.

The entire drama, which triggered panic in the area, was captured by television cameras that showed the man in light coloured pants and a dark jacket, walking away on an empty road barricaded by police, turning around and shouting at the protesters.

The students were heading from Jamia to Mahatma Gandhi’s memorial Rajghat. The march was stopped at the Holy Family Hospital near the university.

Thousands of protesters have been part of sit-ins and demonstrations around the capital for more than a month to voice their opposition to the law they say is at odds with India’s secular constitution.

The CAA bars undocumented Muslims from neighboring nations including Pakistan, Afghanistan and Bangladesh from seeking citizenship in India. It’s seen as a precursor to a nationwide citizens register that aims to weed out illegal migrants and which critics say is expected to be used against Muslim citizens by the government led by Prime Minister Narendra Modi.

Meanwhile, Thakur has been criticised widely for his approach and the Election Commission of India has barred him from campaigning for the Delhi assembly polls.